Francis Lewis Behind the Scenes: School Life After School 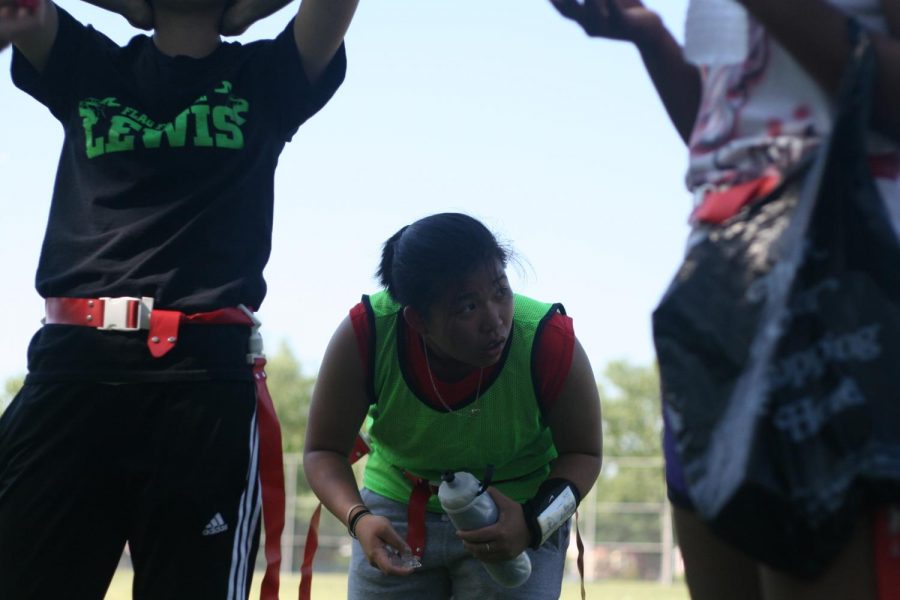 Coach Kunz brings ice during flag football practice to help the members cool down in a break after a long session in the sun.

Francis Lewis High School is infamous for its overwhelming population size and its madness when the bell rings. But what happens after the final bell, when the hallways empty out and the orange sunlight floods in? A whole new world is born. Behind the still quiet of a seemingly desolate school building, the school becomes alive, a different kind of life. We see the true characters of the school community, from students to teachers to staff.

This is: Francis Lewis Behind the Scenes.

Extracurricular activities are essential to the after school scene and clubs play a large role in that. A majority of students are involved in club activities and many of them are student-founded. It’s a place where students can really play the center role and still create an educational experience in a relaxed atmosphere apart from school hours.

“Playing board games, teaching each other things that we personally learned, and just having conversations allowed me to develop my conversational skills and the love of sharing knowledge,” Pi Club Vice President and Co-founder Rocktem Bhowmik said.

In fact, many club leaders work hard to instill something deeper into their members. They strive to make a club a more meaningful place, a place of solace away from everyday academic struggles.

“I only want them to be happy,” Anime Club President and Founder Alex Seepersaud said. “I want them to come to that club and just be happy, have a nice, peaceful place, forget about everything else.”

The same feelings hold true in the club members themselves. Photography and Gardening Club member Erika Versoza said, “I sometimes don’t want to leave since it feels like home.”

“Not only are you learning, doing work, and meeting people, you’re making memories and developing lifelong skills that are beneficial,” added Versoza.

Sports teams, equally a large part of after school life, also provide productivity and an oasis for students. Flag football member Aliya Argro continued playing in another team after her tennis team’s season ended because “I felt like I still needed to be active in a way.” Similarly, former tennis team member Jacky Correa followed suit.

“I like having something to do after school,” Correa said. “I like getting out of the mindset of just academics. I want to put my mind to something else.”

Argro and Correa have found that ‘something else’ in a welcoming community of teamwork and camaraderie. They both love their teammates “with a passion”, and that warmth lights a fire within them to continue to work hard for the sport.

“When you’re put on the field, it’s one of the best feelings in the world,” Correa added.  “You feel so motivated and powerful and amazing on that field.”

In addition to students, Francis Lewis faculty members are a key component to our school community as they dedicate a lot of time after school to their career. “Technically you will see the whole math department after school, because everybody’s working overtime,” says math teacher Ms. Lin.

Many teachers say they “don’t have a life” because they spend so much time at school, working into the night, all for the students.

“I want them to be good, so I try my best to help them,” Lin added. “If you are a teacher who tries your best to help your students, then you have to sacrifice a lot of time.”

In the English office, teachers don’t see their own children often and “do a lot of takeout”, but they work to make the best of the time they do spend after school through food or friends, laughter, and honest conversations.

“We make it as fun as we can,” said English teacher Ms. Rothenburg. “We’re serious, but we try to keep the mood light. We’re English teachers, we have to be.”

Nevertheless, this is only a fraction of what takes place after school. Francis Lewis offers a diverse array of extracurricular activities for its diverse population, and it’s bustling with life and culture. Francis Lewis fosters 49 listed clubs, 35 sports teams, 16 in the spring alone, and the school’s JROTC program has seven teams, each with their own practice.  The time students and staff alike devote to the school reveals the tenacity of the hard working characters that make up Francis Lewis.

“I want to do my best [and] give what I have in order to do the best I can at my job,” said math teacher Ms. Zhou.