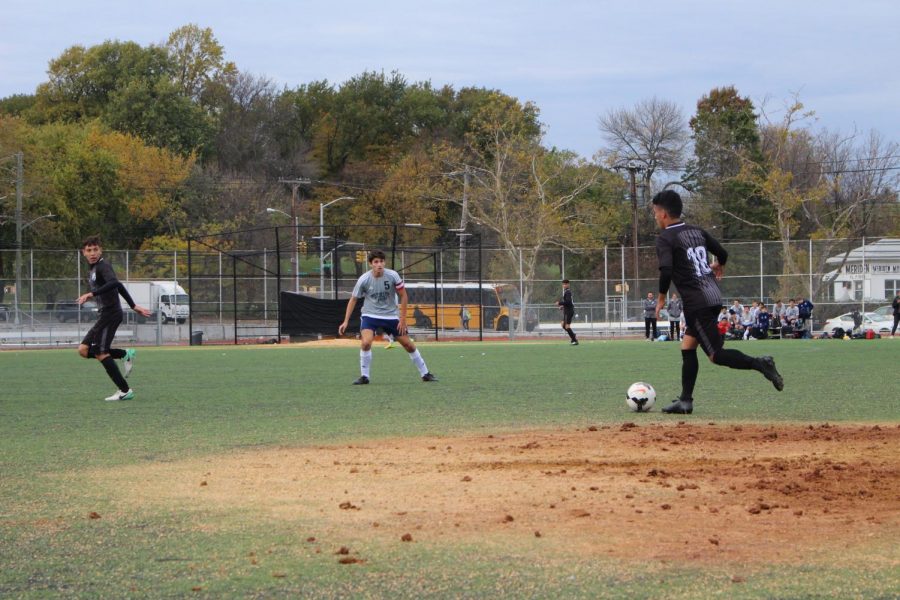 The Francis Lewis Boys’  Varsity Soccer team finished with an 8-1 record atop of the Queens A East League and advanced to the third round of the playoffs against Tottenville, losing 4-3 in overtime.

“The most memorable game was against Tottenville because it was one of the hardest games all season long,”  senior Julian Sandovalit said. “It was the last game for the seniors. I will always remembered it because of how close we were. Sadly we lost 4-3 on extra time.”

“We were playing away, not playing on our home field, so it made it a bit more difficult,” Coach Sarmuksnis said.

The team suffered their first and only loss of the season against rival Bayside High School on October 13.   Bayside finished the season in second place behind the Patriots with a total of 24 points in league play.  Francis Lewis also split games with Bayside last year as the rivalry has proven to be competitive each season.

“Bayside High School has a tremendous soccer program,” Coach Sarmuksnis said.  “The team is becoming better because they too are practicing and want to win.”

The Patriots won a close match against Campus Magnet, edging their opponent 3-2 in overtime.   Both teams were tied 2-2 going into the second half , where it remained scoreless.  Junior Mohammad Mashriqi had three saves in the game, giving him 10 saves for the season and only four goals scored against. Senior Jean Rodriguez scored two goals as junior Jason Budhai contributed one goal in the victory.

“[Campus Magnet] knew we were in first place so they came with everything they had,” Sandoval said. “They played their hearts out and it was a really physical game. The game looked as if it was a playoff game with high intensity from both teams.”

Eleven seniors will be leaving the team this year, many of which have been on the team since their freshmen year (www.psal.org). Spending four years practicing and competing with each other has created a sense of unity among the players.

“It’s been a pleasure to play with them during my four years,” Sandoval said. “I’ve learned a lot from each player. They are like my  second family.  We always [have] each other’s back and I think this is one of the best teams I’ve ever played [on], certainly the best in Queens.”

According to Coach Sarmuksnis, the secret ingredient for improvement is practice.  Every weekday during the season, the team starts practice right after school, a dedication that has allowed them to rise to the top of their division this year.

“The boys are dedicated to becoming better and better everyday,” Coach Sarmuksnis said. “Just because we win the first game does not mean we are going to win the next game.  [There] is no excuse for us to lose, we should always strive to win.

“Our hopes for next year is to repeat what we’ve done this year and continue to develop these young men and respectful human beings,” Coach Sarmuksnis said.  “We need to improve on our commitment to practice and our academics.”