Nu Gamma Psi: It’s not a Team. It‘s a Brotherhood. 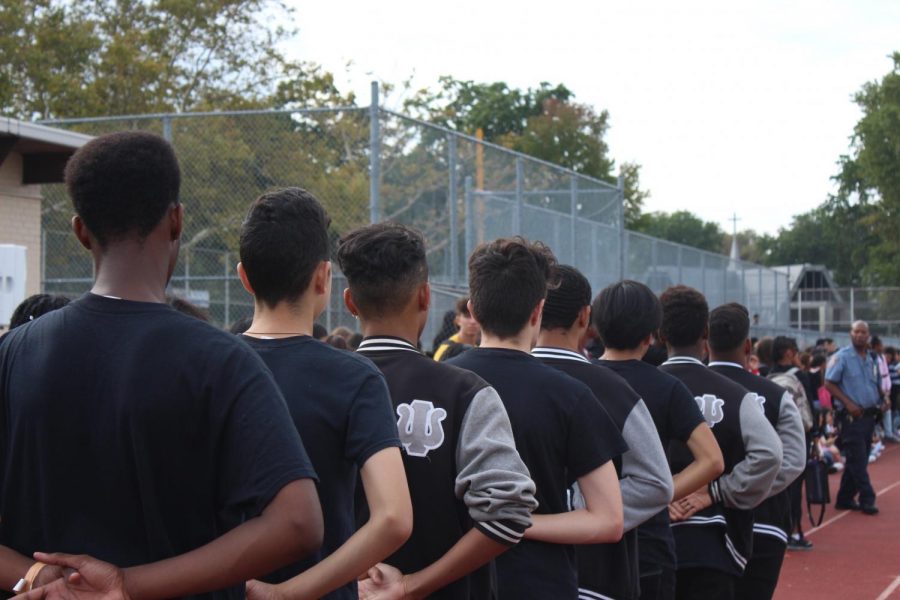 The Francis Lewis Male Step Team prepares to perform at the Pep Rally.

The Francis Lewis Boys’ Step Team, originally known as “The Hit Squad”, was founded in 1993 by Kevin Macintosh, Sakeena Kalik, and Tara Spivy Williams. The original team has undergone a series of vital changes, such as the change in name to “Nu Gamma Psi”.

“The purpose of the step team is built on the African tradition of stepping, a form of percussive dance,” Advisor and English teacher Ms. Jackman said. “It’s about the tradition associated with African American culture, oral tradition.”

Stepping roots back to African slaves during the 1800’s, serving as a way to share their stories and opinions in a coded manner to remain protected in an oppressive and brutal society. Not only did stepping grant them the opportunity to voice their opinion without being reprimanded, it also helped them keep up their morale and esteem while minimizing the pain of slavery.

Over the years, stepping has evolved through a series of adaptations of African and slave dances such as Gumboot, Juba, and Ring Shout, according to Step Afrika! and NCpedia. Today, stepping can be found primarily in both fraternities and sororities in American college campuses and clubs in high schools.

“Around 2012, the boys’ step team was starting to faze out, so I reached out to some former students,” Ms. Jackman said. “They had a meeting and they came to ask me to be the advisor. That was March 2012.”

Becoming a part of the team is a rigorous process as the foundation of the team relies heavily on dedication and hard work.  The Nu Gamma Psi Boys also make it a priority to preserve the original roots of stepping.

“If you ask any member on the team, they could tell you the same answers if you ask them the same questions you asked me,” Ms. Jackman said.  “They would be able to tell you about the founders, when the team was founded, the original name of the team. Part of our tryout process is knowing the history of the team and knowing the important alumni associated with the team.”

Despite the commitment and hard work required, the club welcomes members who are eager to join.

“I saw the step team as something unique and different from other teams,” Co-captain Isaiah Olmo said.  “I joined Nu Gamma Psi because they made rhythm from nothing but their bodies and [it was] something that was exclusive to the team.”

Nu Gamma Psi’s constant success has generated popularity for the team at Francis Lewis, as its achievements and victories have allowed it to become well known in the step team world, both locally and nationally.

“As steppers, they are probably ranked top five in the city and definitely top ten in the country,” Ms. Jackman said. “They are always competing and placing in the top three, if not winning first. Last year they were the highest scoring team nationally in the National Step Team Tournament.”

“Nu Gamma Psi means ‘Now Get Upset’,” Co-captain Raymond Gordon said. “It’s because we are known for upsetting the competition.”

“All of our students go to college and to me that’s the most important achievement,” Ms. Jackman said. “I always press to the kids that they are students first and steppers second. Two or three years ago, they won an academic achievement award for having the highest GPA.”

The team’s mantra, “It’s not a team. It‘s a brotherhood.”, reflects their closeness and unity as a team. As a member of the step team, one develops a strong bond between the other members and the club advisor, and one will learn and take away a series of life lessons.

“Step team plays a big role in my life,” Gordon said. “It taught me a lot, not just for high school but for the rest of my life.”