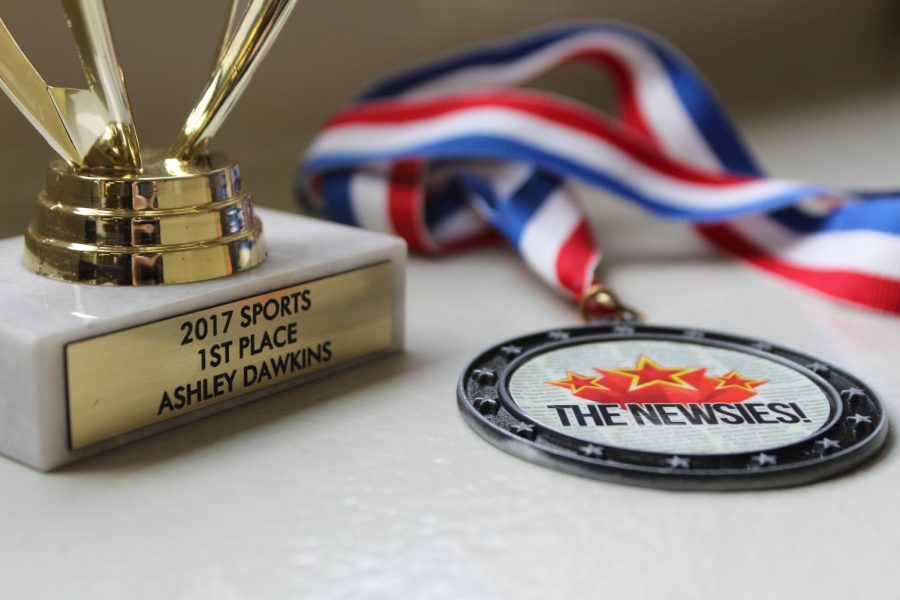 Winners of the Newsies! were awarded with golden star trophies and medals.

Anay Cortes, a junior, won first place for Photojournalism and Community News with her piece A Nickel for a Bottle: Surviving off of Cans and Bottles. Ashley Dawkins, a senior, won first place for Sports News and second place for Multimedia Storytelling for her audio report Breaking Gender Barriers with Flag Football. Yasmeen Persaud and Illy Marion, both seniors, won first place in National/World News for their article Necessary or Profiling? Francis Lewis Feels the Effects of the Travel Ban.

“I’m really surprised that I actually won this award, but I’m really excited,” said Marion. “I feel like I have accomplished something and I have been acknowledged for my hard work.”

Marion and Persaud reported on how Executive Order 13769: Protecting the Nation from Foreign Terrorist Entry into the United States – otherwise known as the “travel ban” – affected people within the Francis Lewis community. Judges in the competition stated that they were successful in reporting on a major international and national issue from a local angle. Francis Lewis is known to be one of the most diverse high schools within our area. With a large number of immigrants enrolled in the school, many students expressed concerns over how the travel ban would affect them.

“Our message was to show how this travel ban impacts not only adults or [undocumented] immigrants, but how it also impacts innocent people and their children,” said Marion. “They’re just aspiring to accomplish their dreams here and they shouldn’t have to suffer because of the ban.”

“I didn’t expect to win because it was my first audio piece and I was going up against people who were more experienced,” Dawkins said. “To actually win was mindblowing.”

Dawkins’s audio report describes how girls’ participation in male-dominated sports serve as a huge step in expanding opportunities for women on the sports field.

“The story was about the Francis Lewis Girls’ Flag Football team,” Dawkins said.  “I never heard of it before; I didn’t even know girls really played football. This is a cool story because in everyone’s mind, football is a guy’s sport, it’s not a female sport.”

Dawkins hopes to encourage other females to actively play the sports they desire without hesitation.

“I wanted girls to know that they could play any sports they want. It doesn’t matter if you’re a female,” Dawkins said. “If you [like] a sport, you should go for it, you should play it.”

Dawkins originally joined the academy with little knowledge in journalism. She reflected on how the experience of reporting changed her personality from being a shy person to an outgoing journalist. The achievements have encouraged her to continue reporting newsworthy stories for the school newspaper.

“It makes me want to try harder to win even more awards and maybe explore journalism as a career,” Dawkins said. “It’s really opened a door. I never thought that I would be interested in journalism before.”

The news writing skills of the students not only impressed the judges at the Newsies!, but also earned praises from Ms. Linge, an advisor and teacher in the journalism program, which is in its third year of operation.

“It’s not easy to start a media outlet, and I feel like it’s a great milestone in terms of showing what we’re capable of,” Ms. Linge said. “I think this is only the beginning, and I’m very proud of our students.”

Ms. Linge strongly believes that these awards reflect the efforts that have been put into producing and reporting stories in all different media formats and subject areas.

“I was also happy to see the students venture into multimedia, using sound and images to report,” Ms. Linge said. “There are many ways to tell a story, it’s not just writing. I hope that we continue to explore multimedia as a way to tell stories.”

English AP Mr. Johnson has also recognized the hard work of the participants that represented Francis Lewis at the Newsies!.

“The English Department is proud of the success that the academy has achieved,” Mr. Johnson said. “We’ve invested a lot in purchasing cameras and recorders that the students use to be able do their best work, so that it showcases the program for the rest of the student body.”

With this year’s results surpassing his expectations, he has high hopes for more accomplishments by the journalism students in the future.

“I think it would be outstanding if we can get nominations in all the categories next year!” said Mr. Johnson.