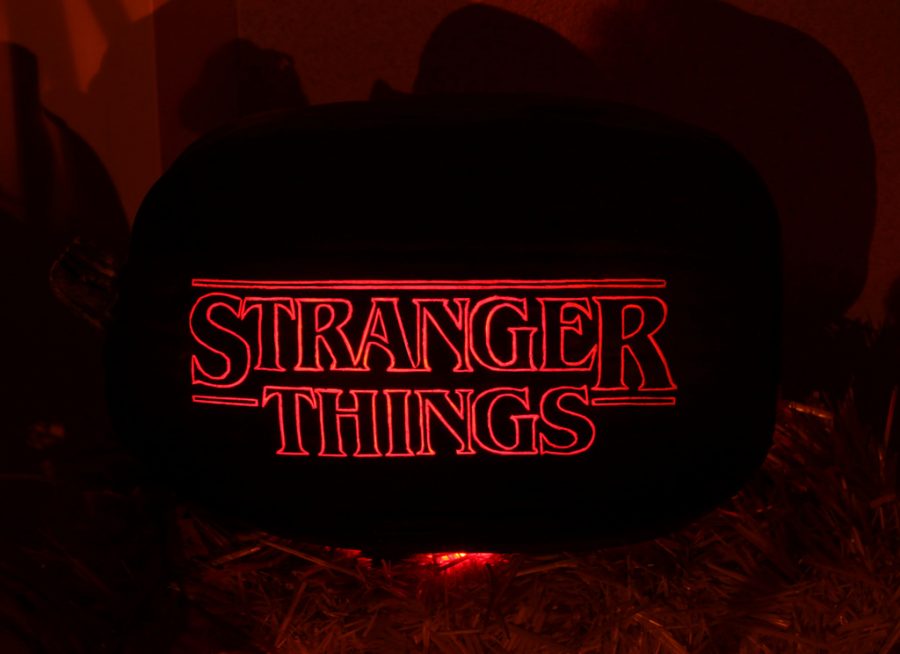 The internet has been blowing up about a new smash-hit from Netflix, Stranger Things, and rightfully so. Stranger Things is a mix of thriller, mystery, and, surprisingly, comedy. The directors, the critically acclaimed Duffer Brothers, Matt and Ross, have worked on famous things like the movie Hidden, and another episodic series in the same vein as Stranger Things, Wayward Pines. The series is a love letter to everything 80’s, and the elements of the decade’s culture, recreating them in just the right way that makes all the insane things that happen seem perfectly believable.

Stranger Things is set in 1983 Hawkins, Indiana during the Christmas season. Season one starts off with a game of Dungeons & Dragons between four boys, Mike, Dustin, Lucas, and Will, played by Finn Wolfhard, Gaten Matarazzo, Caleb Mclaughlin, and Noah Schnapp respectively. When Dustin, Lucas, and Will go home, Will is met with a strange shadow in the road (later, explained to be the antagonist of the season, a monster named the “Demogorgon”) that takes him away. Distraught, Will’s mother, Joyce (Winona Ryder), searches for him with his brother, Jonathan (Charlie Heaton), and police chief Jim Hopper, played by David Harbour.

The acting in Stranger Things is phenomenal. There aren’t many scenes involving Mike, Dustin, Lucas and Will that don’t end in laughs. Winona Ryder and Charlie Heaton are also quite talented, with some of the most powerful scenes of the season involving the two of them. The bond between them as mother and son seems completely genuine on screen, though, very rarely, Ryder’s reactions as Joyce becomes a bit over dramatic.  David Harbour’s performance as Chief Hopper was especially notable, as his scenes are a cut above the rest. Hopper’s presence as a police chief is imposing and demands respect.

Mike, meanwhile, finds a strange girl with psychic powers named Eleven (Millie Bobby Brown), who says that Will is trapped in a place called the “Upside-Down,” a foggy, cold place that mirrors the town of Hawkins in some twisted alternate reality.  The Demogorgon (named after a monster in Dungeons & Dragons, a ‘demon prince’ that lives in the shadows) is defeated by Eleven as the two of them turn to dust. The last moments of season one shows Will’s family, together again, enjoying their Christmas. Evidently, they aren’t out of the woods yet, as Will, in his last scene of the season, coughs up a strange looking slug into his bathroom sink, and sees a quick vision of the Upside-Down.

Stranger Things uses its cinematography to not only set the mood, but also hint at which characters we should focus on, and in some cases, to foreshadow future events. After Chief Hopper investigates a place connected to the appearance of the Demogorgon, gets caught, and wakes up back in his house with a mark from a needle on his neck. He looks around slowly, the camera panning slowly out from where he is laying until he realizes what happened. He suddenly jumps up, and frantically tears his house apart, the camera cutting to a new object getting decimated every second, until he finally finds what he was looking for. The camera’s frantic cutting stops, and pans down to meet Hopper, visibly relaxing. The panic and the relief seen in the camera’s cuts and pans alone portray perfectly, even without any context, that Hopper was paranoid, and searching for something.

Stranger Things 2 is set during the Halloween season, almost a year after season one. After coming back from the Upside-Down, Will sees visions of it periodically, haunted by a creature that looks like a cross between the Xenomorph from Alien and a Cthulhu beast, a monster that the other boys call the “Mind Flayer.” This Mind Flayer controls the Demogorgons (yes, plural as in there’s more than one) of the Upside-Down, now called “Demodogs” for their dog-like stature.  At the season’s end, Hopper, who found Eleven alive after the first season’s incident, brings her close to the Mind Flayer.  After a long and emotional moment with Eleven driving the Mind Flayer back into the portal, the connection it has with the Demodogs severs, killing them, and ultimately solving the problem.

With the Mind Flayer gone, the town of Hawkins can finally relax, and the final scene, the school dance, shows them doing just that. Mike and Eleven have a dance while Lucas and Max, his love interest, share a kiss.  Dustin is left alone, in one of the saddest, yet most adorable scenes in the show, where Nancy, feeling bad for him, offers to dance with him. The season ends with a soothingly spooky rendition of “Every Breath You Take” by The Police, as the camera pans down and flips over to show the Mind Flayer, trapped in the Upside-Down, watching over the school as it storms in the background.

The soundtrack in season two is phenomenal.  The synthesizer keyboards and the period-appropriate music give off a very strange, off-putting feeling just when its needed.  The chilling tones of Every Breath You Take make sure you don’t forget that the Mind Flayer is a very real threat, while still giving the end of the season the proper heartwarming focus on the feelings of the characters. If this were any other decade, the soundtrack wouldn’t be able to convey the feelings and the mood of the series so perfectly.

An episode in Stranger Things 2 that could have been better was The Lost Sister, in which Eleven leaves Chief Hopper’s house in an attempt to find her biological mother.  Upon meeting her mother, she discovers that there was another girl with her early in her life when she was the subject of experiments at the government lab in Hawkins. She was tattooed number 008 (Eleven has one on her arm that says 011, her namesake), and named Kali Prasad.  Eleven leaves Hawkins and meets Kali, along with her group of stereotypical criminal friends, Dottie, Mick, Axel, and Funshine.  Funshine. Just read the name and try not to cringe. One good thing that resulted from this episode was that Eleven learned to control her powers by venting her pent up emotions. Other than that, the plot of this episode was oddly not Stranger Things, more like a strange parody of Luke Skywalker training with Yoda. Thankfully, it doesn’t entirely detract from the story line of the season.

Stranger Things has a well-executed overarching plot, and the characters’ motivations fit their situations. The setting, music, and sound design made for an excellent spectacle, not to mention the visual effects, which were perfectly stunning. The cast acted their parts with relative ease, only at a very rare moment being even slightly wooden. With complete confidence, I can say that this series deserves a 95/100, a perfect score, if it weren’t for that one episode.