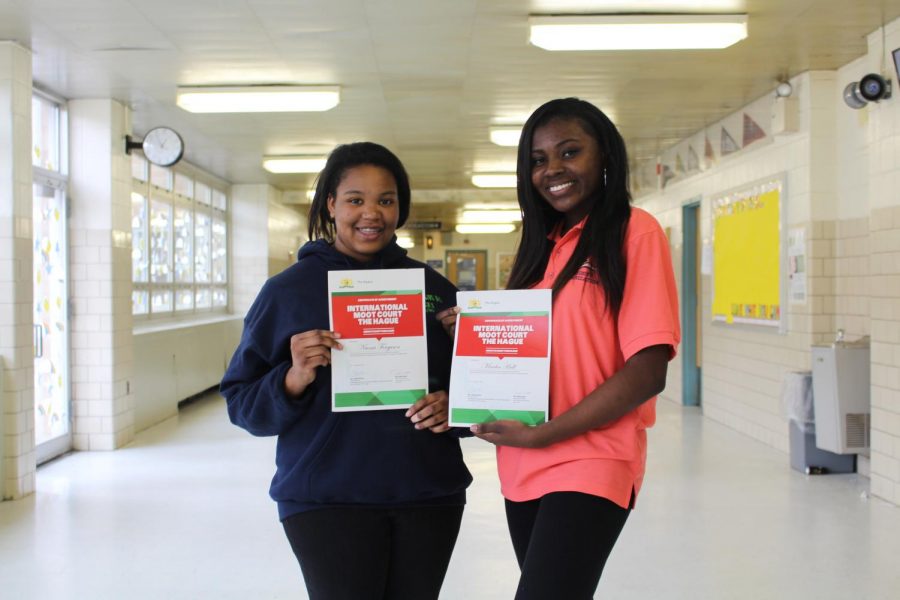 Hall and Ferguson were filled with joy to finish in the top three spots at the International Moot Court Competition.

“To represent our country in an international competition, one must have maturity and good character,” said Deborah Fogarty, Hall and Ferguson’s former teacher who recommended them both to the IMC. “Both Meicha and Naomi gave all the time and effort required and they were both such gifted orators.”

In selecting the two students, Fogarty was impressed by their abilities to perform so well orally when they were on the Francis Lewis Moot Court team. In preparation for the competition, both teams spent countless hours with MENTOR attorneys researching case studies and building their public speaking skills.

“It goes to show me that I am capable of doing something so much more in the world,” said Hall. “I think it set me forth for a good future. If I keep working hard at something, I can accomplish something as great as I did when I went to the Hague.”

Hall and Ferguson competed against teams from twelve countries, with three being Venezuela, Poland, and Azerbaijan. Participating in a competition with such diverse students allowed all of the teams to get a glimpse into the ideas of different law systems across the world.

“It is always important to learn from others and understand their perspective,” said Daniel Shin, AP of the Social Studies Department. “One’s surrounds and culture play a role in their perspective and approach to various scenarios.”

In a fictional case concerning child soldiers, the competition was judged by jurists and prominent judges on the International Criminal Court. The question to be debated on was if child soldiers should be prosecuted for crimes they committed as a child.

“I think it is definitely important cases now because as Americans, we are kind of blind to a lot of third world country problems dealing with the vulnerability of children and children being in positions where they have no control,” said Hall.

Students were expected to not only present their arguments, but also refute the arguments made by the opposing teams and answer questions from judges who challenge them on the spot.

“It gave me a new outlook on how to speak on oral advocacy, how to get people to listen to your points, and how to speak in front of people even when you’re nervous or scared,” said Ferguson. “It has helped me grown personally as a speaker, has helped my confidence, and has given me a new experience that I’ll never forget.”

Along with teamwork, their individual efforts have helped propel their respective teams into the finals.

“I think it is a tremendous honor just be selected on the team, but to do exceptionally well is a testament to their work skill and work ethic,” said Shin.

This invaluable experience allowed both students to meet people of different backgrounds and their varied perspectives on life, school, and world events. All participants gained an extensive knowledge of international law and how it affects their everyday lives.

“Whenever anyone has the opportunity to travel to another country and experience a new environment, it is a great learning opportunity,” said Shin.

Despite being on separate teams when representing the United States at the Moot Court Competition, Hall and Ferguson have supported each other throughout the entire process from practicing to placing in the top three.

“We came in here together and whatever happens, we’re still friends at the end of the day,” said Ferguson. “Whether we win or lose, it doesn’t really matter.”