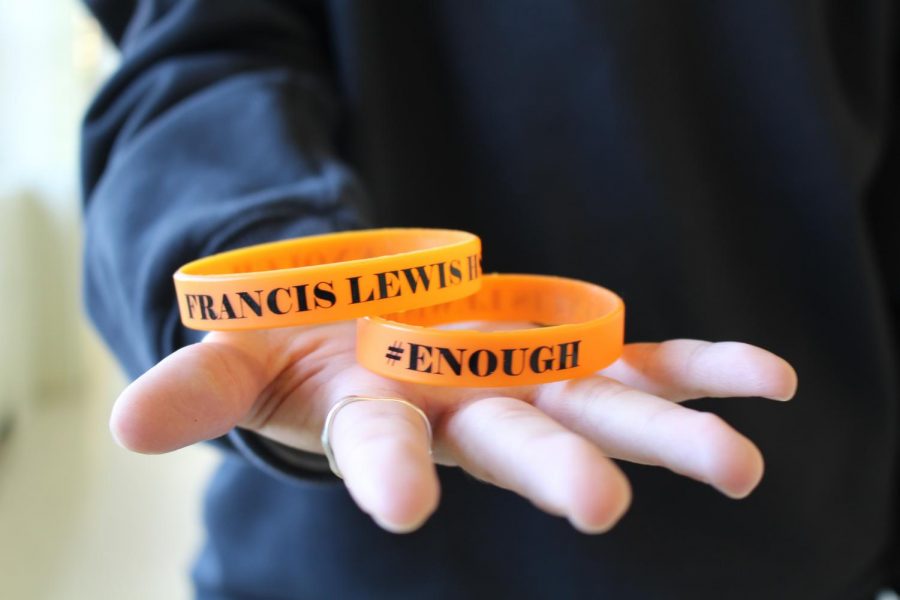 Silence engulfed the athletic field as the students of Francis Lewis gathered for a moment in remembrance of the 17 innocent lives lost in the Parkland shooting. With red roses in their hands and poster signs waving in the air, one question remained on everyone’s minds: What’s being done to make sure that we’re not the next victims?

Last month, President Trump proposed the highly controversial idea of increasing school safety by allowing the states to decide if they want to arm educators with guns.

“I think it’s a ridiculous idea to solve the issue of guns with more guns,” senior Nahirovy Figueroa said. “I have cousins who are teachers and they say they would not feel comfortable with themselves being armed.  Even going through the training would scare them.”

“Teachers are here to teach and went to college to be educators, not law enforcement,” Pritchett said. “I, for one, don’t want the responsibility of shooting anyone.”

She believes that teachers should play a role in educating students to be more aware of gun control.

“We should be discussing mental health awareness, stricter gun regulations for young adults and school safety – not giving teachers one more responsibility to handle,” Pritchett added.

Many remain divided on how the government should act to protect children from future school shootings. Some believe that rather than arming teachers, it would be more effective to reform gun laws.

“We feel safe because we work together, we belong together, we’re a unified school,” AP of Guidance Annette Palomino said. “Putting armed teachers in a school building doesn’t make anybody feel safe. To make us feel safe, change the gun laws and children will feel safe.”

In contrast, senior Enrique Hernandez believes in practicing his Second Amendment to the United States Constitution, the right to keep and bear arms.

“I don’t think there should be stricter gun laws,” Hernandez said. “It’s already strict. In New York, you can barely even carry a weapon and other states you have open carry.”

Although he believes that everyone should have the right to possess guns, he sees it as unnecessary to arm teachers with guns. Instead of arming teachers, he suggests that school security be improved.

“Our security that we have right now are unarmed and I don’t think that’s a smart choice,” Hernandez added. “I feel like they should go through training and give them a permit for [a] handgun or weapon.”

When it comes to making schools a safer environment, students believe that another possible solution is unity. Senior Billy Azurin believes that perhaps the simplest solution is for society as a whole to set aside their differences and come together.

“Learn to love,” Azurin said. “In today’s society, everyone is so focused on trying to find new ways to hurt each other or create barriers, why not try to find a way to unite each other.”