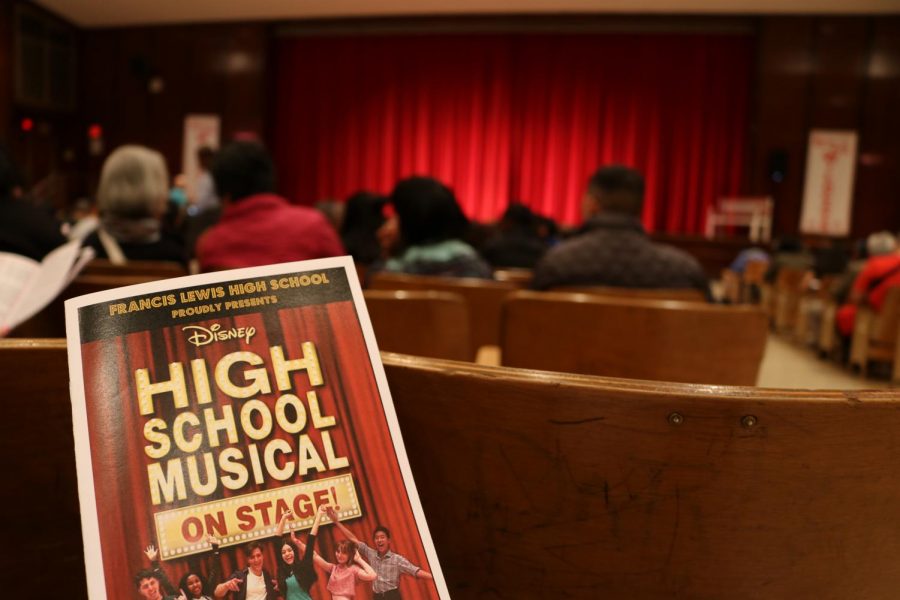 Audience members wait as show is moments away from beginning.

Students, teachers, and parents gathered in the Francis Lewis High School auditorium on May 11 and 12 to watch a student stage production of High School Musical, a Disney musical written by Peter Barsocchini.

High School Musical was chosen as the school play due to high popularity among classmates. The preparation for the play took nearly four months and the students and staff worked hard to ensure the audience would enjoy the performance.

“I think it’s the biggest selling or highest viewed Disney Channel original movie ever to this point,” said Ms. Contino, director of the play. “Teenagers still are walking around, singing it. Everyone just seems to love it. We like the audience to feel like they’re watching one of their favorite movies, to recognize the music, to cheer on their peers. It’s pure entertainment.”

Students who participated in the production stated that the experience brought people closer together and helped students work on their social skills, as well as create new friendships.

“I think it’s a great opportunity for anybody involved because you build so many new bonds and connection and it’s honestly such a fun experience all in all,” said Elias Kenouryiakis, who plays Chad in the play.

As the curtains closed for the last time, the audience cheered and applauded until the lights came on once again. Families and friends rushed to the front of the stage to greet play members. Jeanine Daniels, an audience member and friend to Kenouryiakis, reflected on the performance.

“I loved the artistry,” said Daniels. “The set was really cool. The music, the band, the energy of the kids. [Elias] told us about it back in December. We said ‘No, we’re gonna come support you’ because he was so great. And so we put it in our calendar and here we are. We’re blessed. We’re glad we came.”