One in 5000: Emily Gubin and Her Passion for Local Government 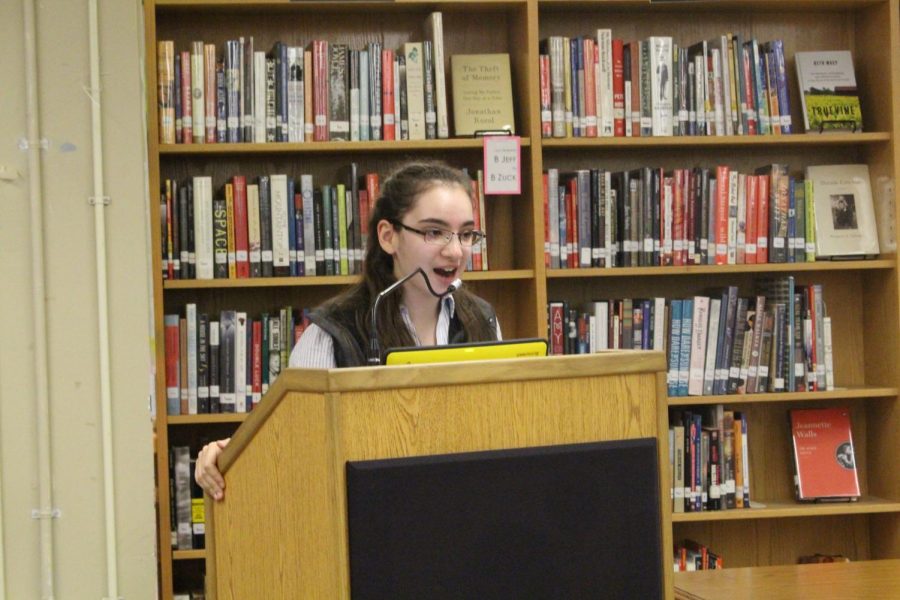 YCE President Emily Gubin welcomes the audience to the event. "All of you will have the unique chance to meet someone who embodies our present generation of leaders," Gubin said.

Junior Emily Gubin has shown her enthusiasm for local government through her actions at Francis Lewis. In the 2018-2019 school year, Gubin founded the Youth Civic Engagement Club (YCE).  Since founding YCE, Gubin has invited Assemblywoman Nily Rozic, who she interns for, to speak to students in the library.

“YCE Club is an initiative to build a bridge where students and young adults meet civic leaders in the community,” Gubin said as she was explaining her club’s mission. “Too many civic people and politicians are turning to young adults nowadays to win more votes for themselves and have a good turn out after elections, but not much is done in exchange.”

Although there are clubs that have similar goals, Gubin specified that the ability to speak directly with local leaders is what makes YCE unique to the FLHS community.

“What distinguishes us from other clubs is that we’re specifically advocating our local leaders, politicians, [and] representatives,” Gubin said. “Not everyone goes that extra mile, and not everyone reaches out to our local representatives, but that’s what our club does. Youth Civic Engagement reaches out to individuals who have already achieved milestones in political activism and in making differences in society.”

“This list of voluntary responsibilities caught my attention and would change my outlook on life and an individual’s power of contribution,” Gubin said. “I recall myself thinking, ‘Why is it that so few people run for office or in the cases when people do, so few people are aware of this?’ In fact, when expanding on this issue today, at YCE, I discovered that few people are informed about their local government.”

In addition to her US History class, Gubin said a seventh grade Make a Difference project was another influential factor. She wrote a letter to Vice President Joe Biden about her proposal for youth engagement in local government.

“I received a response from Vice President Biden, and my vision to develop and strengthen the link between our present generation of leaders and our future generation of leaders lived on,” Gubin said.  “In addition to this, I created a petition and gained many supporters for my cause from my local community.”

Gubin has been interning at Rozic’s office since her freshman year. She sees Rozic as a role model because of her “long dedicated track record of helping [District 25] residents.”

“I met her freshman year, the very beginning of freshman year,” Gubin said. “After emailing members of her team, speaking to them about various issues, and about getting involved in the community, I met up with one of her team members and then the rest of the team. I had the great honor of meeting her and we continued this relationship going forward.”

Gubin hoped that students would eagerly participate in the event featuring Rozic, as she wanted to “get them enthusiastic about local government.” She feels that she accomplished her goal.

“At the end of [Rozic’s] speech, so many hands flew up,” Gubin said. “People had so many questions beyond what was even the quota for the amount of questions she can answer. People were very enthusiastic, and that’s why [the team and I] walked away with a smile. [They] were genuinely interested, enthusiastic, and intrigued by what the assemblywoman spoke about. It was a success, and it was phenomenal.”

Gubin hopes that she can work in a government office one day to follow the path of civic leaders like Rozic.

“[Civil leaders] set precedents and they create models by which people can conduct themselves in their communities and the outside world by creating laws and inspiring other students to do the same,” Gubin said. “That’s what I really want to do. I would love to make a difference for as many people as I can in my community.”

Through her work as president of the YCE, she wants to start a movement to get her fellow classmates to help make the world a better place. It’s her goal to “spread word about [YCE’s] mission to others to join [YCE’s] platform.”

She encourages others who wish to take similar actions to follow their dreams, never give up, and try anything over nothing.

“I always say you can either do something or you can do nothing in your life,” Gubin said. “Many people already tried doing nothing, so the other option is to do something. I always think you can do something, especially something positive.”