A Time of Remembrance: Reburial Ceremony Held for Remains of the Matinecock Tribe 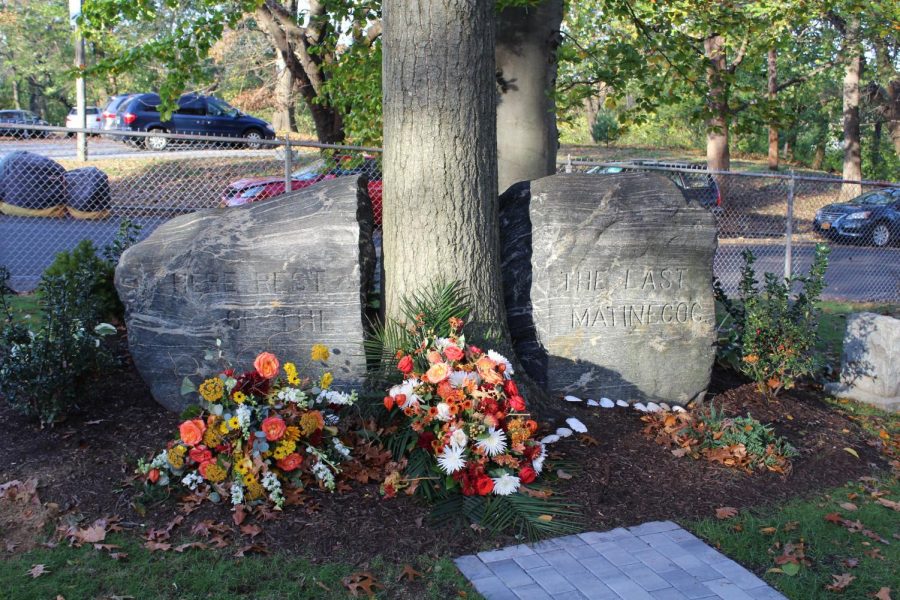 A split boulder engraved with "Here Rest the Last of the Matinecoc." marks the reburial site in the Zion Episcopal Church cemetery.

The piercing, frigid wind swiftly carried the incense from the burning sage across the red purple sunset hues, slowly infusing the burial site. The tight-knit semicircle of attendees pensively paid their respects, firmly grasping the tobacco on their left hands, as the Chief and singer vehemently sang about forgiveness.

On Saturday, November 10 the Zion Episcopal Church held a homecoming burial ceremony for the Matinecock ancestral remains that had recently been repatriated from the Museum of Arts and Sciences in Florida. The remains were part of the excavation of the Matinecock’s cemetery. In 1931, New York City ordered the removal of the remains from the Matinecock cemetery in Little Neck, Queens due to the interference it posed on the widening of Northern Boulevard. Despite opposition by Chief Wild Pigeon and others, the remains were removed and reinterred in the Zion Episcopal Church Cemetery. The reburial site is marked with a boulder split in two, with a tree between the halves, engraved with “Here Rest the Last of the Matinecoc.”

The ceremony was led by Chief Harry Wallace of the Unkechaug Nation, who began by informing the attendees of the history of the Matinecock tribe, including the manner in which they and their ancestors’ remains were treated over the years. Chief Wallace went on to emphasize that the ceremony is one of forgiveness.

“We have to ask for forgiveness for the desecration that was done to the body and spirit,” Chief Wallace said. “We are asking them to forgive us for not fulfilling our responsibilities for caring for them.”

During the ceremony, people were given pieces of tobacco to hold in their left hand. Tobacco, one of the four sacred plants of the Matinecock tribe, assists people in invoking a relationship with the energies of the universe, and ultimately the Creator. The bond made between the earthly and spiritual realms can’t be broken. Shortly after, Ginew Benton, a traditional singer/songwriter and a grass dancer on the powwow circuit, arrived and performed a touching song about forgiveness with the Chief.

“To me, there is a message,” Benton said. “It is an honor for me to be here and be able to do this for my relatives.”

Some believe the burial ceremony is an important way to shed light on the unfair treatment the tribe has been subjected to by outsiders over the years, from the settlers in the 1600s to Americans in the present day.

The Matinecock tribe strives to close the gap between the tribe and people from different backgrounds. They hope the ceremony and other events, not only commemorate their ancestors, but educate people from outside the tribe as well. In fact, on October 5, 2015, the Matinecock tribe celebrated the recognition they obtained from the renaming of the street corner on Northern Boulevard and Marathon Parkway in Little Neck to “Matinecock Way”.

“We would try our best to use this as an example for our people today to be able to change our view on Native American people.”

Recently, the community has been growing increasingly involved and supportive of Matinecock tribe’s goals. Back in September, 15-year-old Aidan Decker decided to renovate the grave as both recognition and a reminder of the tribe.  For this ceremony, many local organizations and groups came together to help out, from the Historical Society who provided food for the reception to a local funeral home who donated a box for the remains, and to the Church who provided a grave site for the remains. On the day of the ceremony, people of different ages and backgrounds attended despite the cold temperature.

“It was very powerful to see something good and beautiful come from a very terrible moment in our community’s history.” said Reverend Lunnum, “I regret that the original burial ground was moved in 1931, but that act of desecration and injustice was transformed into a moment that transcended time, culture, race, religion, and difference by our coming together to restore what was lost. I will never forget it.”