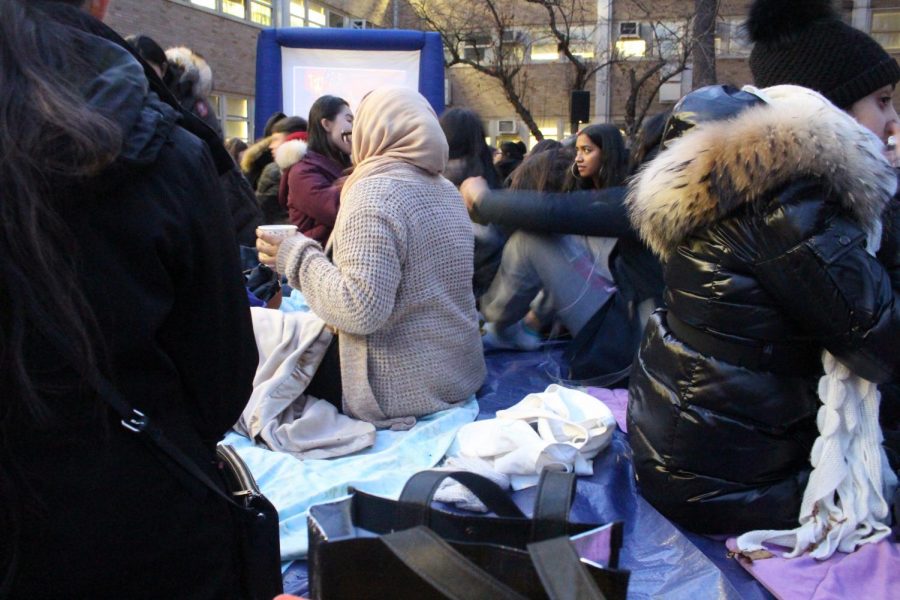 Students chatting with their friends while wrapped in blankets.

Francis Lewis hosted its first annual Winter Wonderland in the courtyard on December 18 for seniors who submitted their college applications by the school’s official deadline of December 1.

“We wanted to do something that would motivate seniors to get their applications in on time,” AP Guidance Ms. Palamino said.  “Every year we get nervous because the seniors don’t do their applications on time, then the colleges don’t get them on time, and it causes a lot of stress.”

Seniors were treated to an evening of food, hot chocolate and entertainment as a reward for staying on track in the college process and preparing for their next steps in life after high school.

“We have a beautiful courtyard that we never get to use so we decided to turn it into a winter wonderland,” Ms. Palamino said. “We have balloons of polar bears, we bought a big movie screen and we are going to show “Home Alone”  or “The Grinch” [while serving] hot dogs and popcorn.”

Submitting their college applications early gave students the opportunity to hear back from colleges and know that the admission process is underway.

“Francis Lewis’ deadline helped me with the application process because I ended up finishing all my applications early,” senior Demi Kapetanakis said. “When all the schools got my application they sent me an email saying they’re already looking at my stuff.’’

Kapetanakis submitted an application to Queens College and wants to major in their teacher program.

“I want to be a kindergarten teacher and I feel like Queens College has the best program for me to do that,” Kapetanakis added.

Although Francis Lewis’ deadline was earlier than required for CUNY and Common Applications, students were grateful for the motivation behind this sense of urgency.

“It helped me to stop procrastinating,” senior Pirzada Rimsha said.  “I [would] probably push it off to the very last minute so Francis Lewis helped me stay on top of my work.”

During the festival seniors grabbed their blankets and searched for friends to find a spot near the movie screen.

“The winter wonderland is actually pretty cool because they made fake snow and gave out food, which is wonderful for everybody to have dinner together,” Petanakis added.