The Hate U Give: Finding “Teachable Moments” in the Classroom 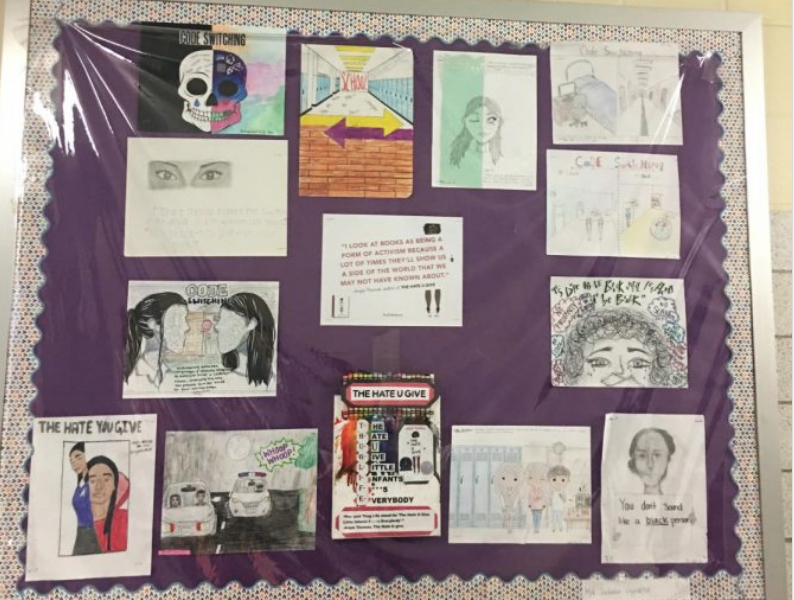 Francis Lewis student projects based on the novel The Hate U Give.

The Hate U Give by Angie Thomas is a young adult novel about the life of 16-year old Starr Carter, a young girl who witnesses the death of Khalil Harris, her childhood best friend. Unarmed, Khalil was shot by a white police officer, showing irresponsibility and police brutality present in many black communities.

English teachers at Francis Lewis are teaching the novel The Hate U Give this school year because the themes and events that take place in the novel connect to the society we live in today.

“I have a class of really thoughtful and charismatic seniors,” AP Literature teacher Ms. Whitney said.  “I wanted to have them read a book that would further their critical thinking skills and analysis of current events.”

Francis Lewis students think that The Hate U Give isn’t just a book they are forced to read in English class, but instead a book that can teach valuable lessons applicable to our lives.

“When it’s assigned you’re forced to read it and process the information,” junior Olivia St. Hill said. “Maybe you’ll be able to understand why blacks are so upset with police brutality and that discrimination does exist in the police force.  You get that actual perspective and you see that it’s not just a myth.”

As the book progresses we discover that Khalil Harris was part of a gang that deals drugs throughout Garden Heights. King, the leader of the gang, constantly warns Starr not to speak up against this incident in order for his business to remain secretive.

Although Garden Heights is a fictional neighborhood in the story, Hill thinks that it can still speak the truth of what’s happening in society.

“In the book you see Garden Heights isn’t the best place to be but they don’t call the cops,” Hill added.  “If you call the cops on him there’s fear he’s not going to make it home. It shows that there’s a real disconnect between us and them.  The meaning behind the book is really to shed light on how decremental police brutality is to society and how it affects us in such a negative [way].”

Ms. Whitney believes that the novel “would be a catalyst for deeper questioning and engaging class discussions.”  She also believes students will inevitably generate concern for relevant issues the book revolves around.

“I hope my students have a deeper understanding of the complex issues the book deals with such as police brutality, systemic abuse of power, implicit bias, the school to prison pipeline, the impact of poverty, the struggles of adolescence, and finding one’s voice,” Ms. Whitney added.

After Khalil’s death Starr is faced with the decision of either speaking out against police brutality, or keeping quiet in order to make sure King doesn’t come after her and her family. When the jury decides n0t to indict, protests and riots break out across Garden Heights. King takes advantage of this time to set Mavericks (Starr’s father) store on fire with both Starr and Seven (Mavericks son) inside.

At the end of the book King is arrested after being snitched on by neighbors, and the Carter family moves into a new house in a safer neighborhood.  Starr makes a promise to continue fighting against injustice, and to never stay silent again.