Junior State of America: Learn to “Be The People” 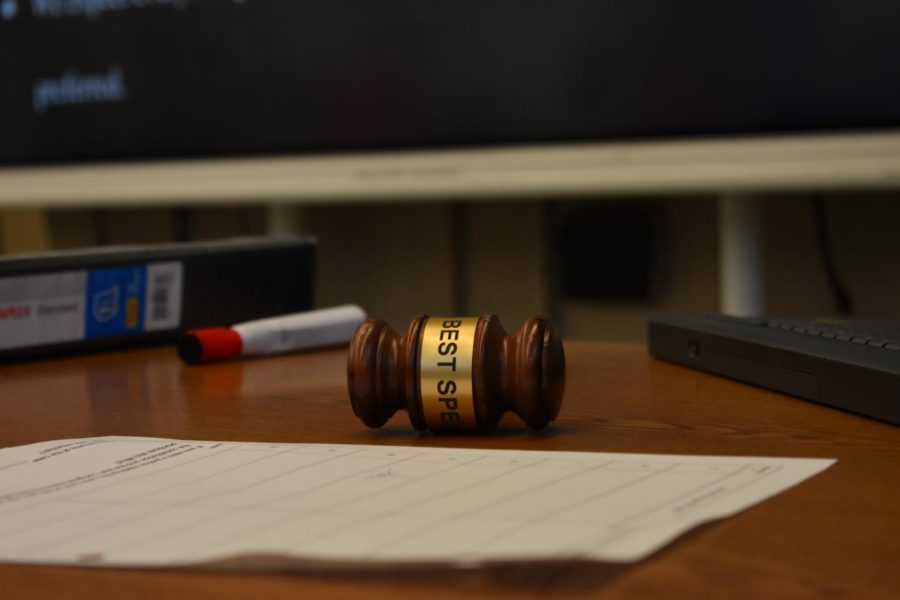 There is a gavel with the words "Best Speaker" on it, which can be utilized by the student leading discussions.

Francis Lewis High School is one of approximately 500 high schools in the nation which offers Junior State of America (JSA), a debate and public speaking club. Of the extremely diverse selection of clubs Francis Lewis offers, JSA is unique due to its ability to help high school students acquire crucial leadership skills and gain the knowledge necessary to be effective debaters and civic participants.

“The organization’s main focus is to promote student involvement in government and civic life, as well as enhance the public speaking and debate skills of students,” JSA adviser Mr. Palladino said.

During club hours, students are offered the chance to speak up on numerous debate topics, ranging from major issues internationally as well as in the United States. However, JSA doesn’t dedicate all their practice time to discussing current events and political issues. JSA also aims to encourage participation and public speaking. Therefore, students are given the chance to formulate their own debate topics, as well as debate about less solemn matters.

“Every week, mostly, we have a debate resolution with main and subsequent, pro and con speakers,” JSA’s Director of Debate Lia Kalinkos said. “[Students] prepare, debate and afterward, vote.  Other times, we do silly debates just for the sake of getting people to participate and learn what it means to make a good debate without the pressure of a serious topic.”

Some may be skeptical of JSA, as it can be categorized with the debate club that Francis Lewis also offers.

“I know we have another club that is like debate and I believe they go all the way to Manhattan to speak to lawyers who have experience in their field,” sophomore Isabella Nuñez said.

Nevertheless, JSA separates itself from other clubs due to the distinctive opportunities offered to students. Since JSA primarily focuses on broadening students’ knowledge about politics and government, students can gain first-hand experience and become educated by attending multiple conventions and trips throughout the year.

“JSA is different from other clubs because we have the opportunity to go on trips and practice what it’s like to make bills and present them as senate or House of Representatives,” sophomore Sandra Toma said.

Students can interact and debate with individuals from other states on these field trips, helping them gain interpersonal and communication skills.

“We go on two major trips,” said Mr. Palladino. “One is called Fall Statem which is usually held in Boston or Providence, Rhode Island, in December and we also go to a second major convention called Winter Congress in Washington D.C. in February. At the Washington D.C. convention, students take on the roles of senators and representatives and debate bills written by fellow students from the northeast.”

In addition to these two major trips, JSA also offers numerous conventions. These conventions take place in a wide range of locations, from New York to Connecticut, usually in high schools or colleges, and can last for a whole day or even overnight.

“If [students] join the organization and attend conventions they are eligible to attend JSA summer school for a fee which takes place at various prestigious universities throughout the country taught by college professors,” Mr. Palladino states.

JSA prepares students for college through its ability to help them gain vital skills and connections that can help in the future.

“I get to learn about current events, gain confidence, and have some fun,” added Sakellaridis. “[I] also connect to other JSA members around the country in conventions.”

JSA also helps students gain an open mind through the many debates and discussions that take place. Not only are students gaining public speaking and debate skills, they are also learning how to listen and understand others.

“You learn tolerance and empathy,” responded Kalinkos. “Especially in more democratic places like New York City, we tend to brush off all Republicans or conservatives as wrong, rather than just different. Being face to face in a debate room with the most conservative person you’ve ever met changes that for you.”

“It’s a culmination of gaining political and current knowledge, learning how to speak in front of people and speak to them, learning respect and tolerance, and learning to ‘be the people,’ that’s our slogan,” Kalinkos added.