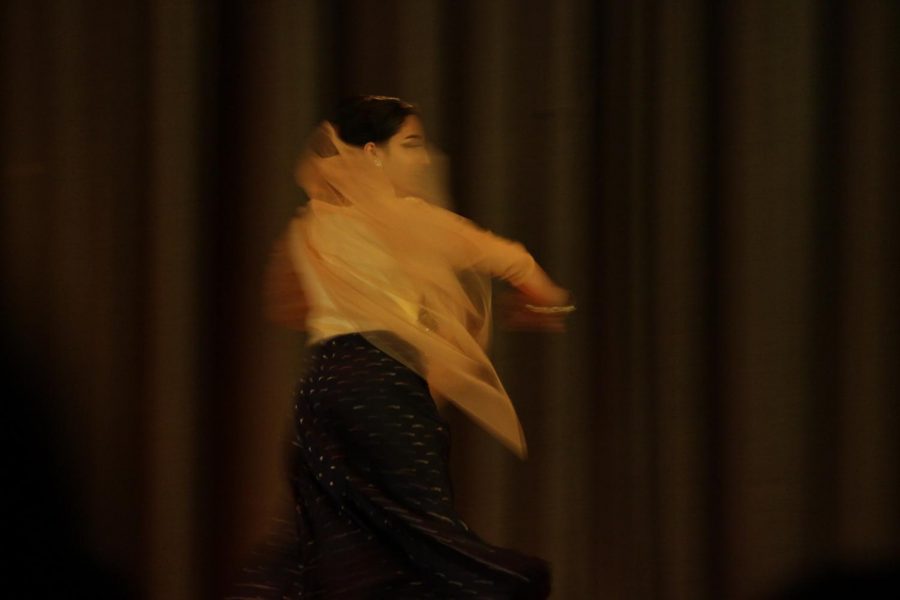 Junior Shagota Dasgupta displayed her culture through her dance. She won first place with a grand prize of $250.

As students, faculty and parents entered the auditorium, the lights dimmed and the MCs started the show with enthusiastic greetings. The stage was decorated with strings of lights and the red curtains were covered with stars. The curtain parted to reveal a girl in a mini dress decorated with flowers. She brought the microphone close to her and began to sing.

After 5 long years,  Francis Lewis hosted its annual talent show on March 15 in the auditorium.  First Sergeant Elizabeth Simmons coordinated the event to allow students to showcase their talents and as a fundraiser for the unarmed Patriot Pride Drill Team.

“The talent show [was] brought back to have fun and unite parents, faculty, students, and teachers, while highlighting those gifted from Francis Lewis… to recognize [their] non-academic talent,” Simmons said.  “[It was] created to build character and team building while fundraising for Patriot Pride.”

The event consisted of 12 contestants taking the stage while competing for prizes ranging from $100 to a 50-55’ flat screen TV. Many students were excited to participate in the show, where they could be themselves and display their talents.

“Originally I was going to play piano, but then I realized that I’ve always done piano and I wanted to do something new, so I decided to sing,” sophomore Ariel Skobelsky said. “I was in concert choir last year and I thought I built up enough vocal strength to do the song I’m doing.”

Students spent several weeks rehearsing for their performances, which inevitably fostered improvement on their musical and performance skills with the help of their peers and faculty.

“I’ve actually been talking to my choir teacher to help me prepare my dynamics and phrasing and other things that have to do with the song,”  junior Bianca Sukhnandan said.  “She’s been helping me a lot this week.”

The event also gave students the chance to discover and reflect on the flaws of their performance during rehearsals.

“It made me realize the nuances and all the flaws I had when singing, and it made me work harder to improve on them,” said senior Paul Pinlac.

Participating students also built closer bonds with their peers and gained confidence performing in front of an audience, allowing them to be more expressive on stage.

“I felt very comfortable and wasn’t scared of the audience’s presence,” sophomore contestant Sabrina Day said. “I had a really fun time. When I heard my friends call my name out, I was really touched. I felt happy and [I’m] so proud to have them.” Day performed a hip hop remix with senior Emily Feng.  Together, they showed impressive moves such as the toe stand.

“It made us closer and it built up our courage around other people,” senior Jasmine Sansaverino said. “Being able to sing in front of other people definitely makes us feel more comfortable.”

Students truly appreciated the fact that Francis Lewis has brought this event back into the school community.

“I think it’s amazing personally,” Sukhnandan said. “It’s good that a school is so interested in a person’s personal interest and personal skills, other than [academics].”