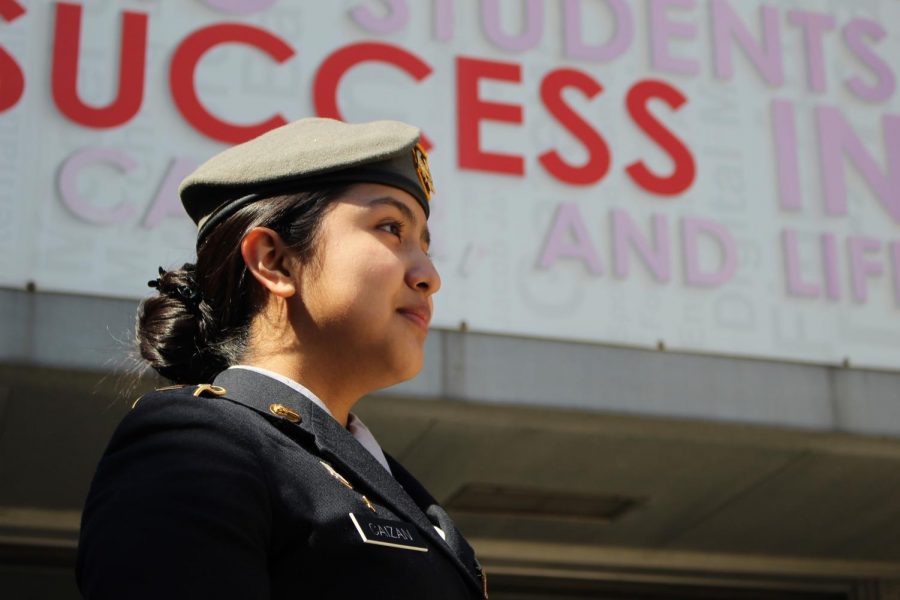 Johnna Caizan stares at the American flag at Francis Lewis High School. She has reflected on the advantages and disadvantages of joining the military after considering life past high school, with law school in mind.

When walking down the first floor hallway of Francis Lewis High School, one can see boards and walls decorated with a colorful display of college banners. Senior students wear shirts emblazoned with the names of colleges they’re attending in the fall. Going to college after high school graduation is a path that is instilled in many from a young age. However, not everyone is choosing to follow the traditional road to college. Johnna Caizan, a senior at Francis Lewis High School, is choosing a different path.

Caizan, 18, was recently sworn in by the U.S. Army. After graduating this year, she intends to serve, saying goodbye to her family members, her teachers, and her friends. With plans of joining the military, she also wants to eventually go to law school.

“I didn’t know what was going to happen in my life,” Caizan said. “So when I was sworn in the last week of February, I felt accomplished. I turned eighteen in February, so I guess it was the first most important decision I ever made.”

Three years after transferring to Francis Lewis following freshman year, Caizan applied to colleges but enlisted in the U.S. Army in February. Both her school environment and her family inspired her to make this choice. At home, her mother understands that it is solely her daughter’s decision if she wants to join the military. It is her daughter’s life, so she will be responsible for what she chooses.

When told she was going to the military, Caizan’s father thought she was “playing around.” Over time however, and after speaking with parents of ex-military sons and daughters, he supported her decision.

“At the beginning, I was so sad because she’s my daughter,” Caizan’s father said. “Sometimes I was happy because she likes that. I want to support whatever she likes. As her father, I’m not supposed to be crying. I’m going to wait for her.”

It’s not just Caizen’s family who is showing support for her decision to join the military. Teachers and students are understanding of her choice as well.

“I was initially surprised when I found out she joined the military,” said Ms. Linge, Caizan’s law teacher. “But it made sense afterward because she is someone who is willing to follow her own path and she will also blaze paths for others.”

Joan Roe, a friend, said she knew Caizan would perform well in a different environment in the future. Roe is supportive of Caizan because she would break gender stereotypes by joining the military and closing the gender gap.

“If she joins the military, I think it will have a positive impact on society and others,” said Roe. “It shows that she is breaking the social norm of going to college right away.”

Caizan offered advice to those following nontraditional paths like joining the U.S. Army, the U.S. Navy, or the workforce.

“You have to be one hundred percent when making that difficult decision because it’s only you who is actually going to be doing it,” Caizan said. “So know yourself, be confident in what you’re doing.”