Newsies Preview: “The World Will Know” 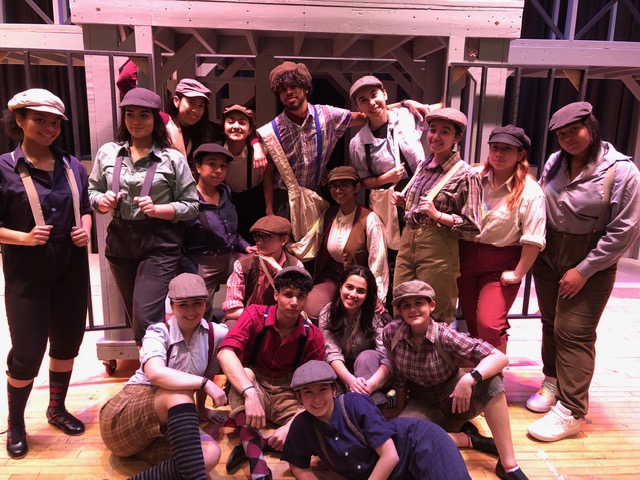 Francis Lewis High School’s Theatre Group, directed by Ms. Contino, will be performing the Disney classic Newsies, on May 23 & 24 in the auditorium.  Ms. Contino chose Newsies because it is relatable to Francis Lewis students, as well as entertaining.

“Newsies has been one of my personal favorite musicals for a very long time,” Ms. Contino said, “The music is so catchy and the story is relatable because it’s about lot of young kids working hard.  The show is so much fun and so entertaining that I thought it was perfect.”

Some may not have heard of the play, like lead actor Brant Zheng, who plays Jack Kelly, leader of the Newsies’ strike, but he was pleasantly surprised after watching it.

“At first when I saw the name I was kind of like, ‘I never heard of this’, but when I watched it, it definitely excited me a lot,” sophomore Zheng said. “I really like the choice this year and I’m really glad we did it. It’s a really nice story.”

Newsies is about a group of newsboys going on strike against a newspaper called The World that raised the price the newsies must pay for papers prior to selling. Led by 17-year-old Jack Kelly, the newsboys are going up against a juggernaut in the news world, who threatens to leave them jobless. Because of the strike, Pulitzer, publisher of the New York World, digs up dirt on Jack to get him arrested, making the newsies stand up to Pulitzer and avoid Snyder and his run down orphanage.

As the theatre group finishes rehearsal in anticipation for their upcoming performances, Ms. Contino reflected on the many challenges the group faced while preparing for the show.

Another challenge the actors and adviser are facing in preparation is the lack of space for rehearsal.

“Space, lack of space, competing with every other event in the building that comes up – International Festival, dance recitals, Arista, Earth Day, Autism Awareness,” Ms. Contino added. “Everything that uses the auditorium becomes an obstacle to when we can get into the auditorium.”

The cast of the show had other challenges in mind, such as attendance during rehearsals.

“Making sure that everyone’s here,” junior Nicole Edmond said.  “If you’re missing somebody, it’s hard to carry out a scene when you don’t have somebody that’s there to do it.”  Edmond plays Davie, Les’ older brother that comes from a wealthy family.

Although there were many challenges throughout the production of Newsies, the cast members believe it’s all worth it.  Even if the actors and actresses don’t pursue acting in the future, they will still carry the skills they’ve learned with them.

“It’s really interesting to go into somebody else’s shoes and kind of see what they’re dealing with and really embody that,” Edmond said. “It’s a different world and to be able to live in that and see what life was about in that time period, it gives you a different perspective on how things were.”

“There’s so much being in a show can do just for your confidence level and your abilities,” Ms. Contino said. “You go from being a shy person to running out on stage in front of 900 people and singing your heart out. It doesn’t really get much better than that in terms of believing you can do anything.”