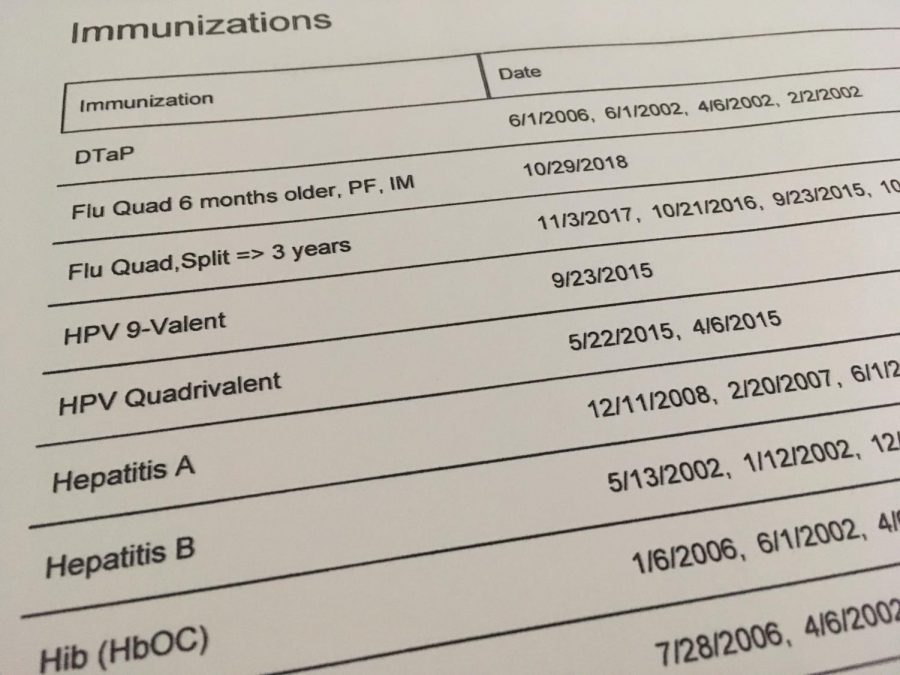 An actual copy of my immunization record.

A measles outbreak has been growing this past year, with 1,044 cases confirmed in 28 states since the start of 2019. That is a large increase since 2000, when the  Centers for Disease Control and Prevention (CDC) declared the disease eliminated. The increase is most likely due to parents and guardians choosing not to vaccinate their children. These decisions in large part are based on false narratives that vaccines are unsafe. As the daughter of a registered nurse and a hospital staff worker with plenty of relatives working in the medical field, I ask of all the unvaccinated students in the United States to get themselves vaccinated and protect their health.

Measles, also known as rubeola, is a viral infection usually caught during childhood. According to the Mayo Clinic, the virus can be fatal for small children, killing “more than 100,000 people a year” under age five. Symptoms consist of a fever, dry cough, runny nose, sore throat, conjunctivitis, Koplik spots, and skin rashes with with large, flat blotches. Further complications include ear infections, bronchitis or laryngitis, pneumonia, encephalitis, and pregnancy problems. Prior to the development of a measles vaccine, the CDC said it is estimated that 3-4 million people got infected every year with 400-500 dying, 48,000 hospitalized, and 1,000 suffering from encephalitis. The MMR vaccine, introduced in 1968, provides immunity from the measles in addition to mumps and rubella/German measles. Prior to 1968, measles cases would go as high as 778,000 like in 1958.

While measles cases started to decline after 1968, “anti-vaxxers” have been enforcing the idea that vaccines harm people. The origin of the movement goes as far as a 1772 sermon by English Reverend Edmund Massey who said “these vaccines as an attempt to oppose God’s punishments upon man for his sins.” In the late 1990s, former British doctor and researcher Andrew Wakefield published a paper suggesting that autism in young children was caused by the MMR vaccine. However, it was discovered that he received funding from people in lawsuits against vaccine manufacturers while critics pointed out flaws in his research and data thus revoking Massey’s medical license.

Some argue that even though the MMR vaccine has existed for 50 years, there have been measles outbreaks in the past decade. The those outbreaks, as the CDC has said, came from communities that chose not to get vaccinated like the Ohioan Amish communities that made up most of the cases in the 2014. There are also immigrants who come countries with low vaccination availability that the come to the US and catch it from others who chose not to be vaccinated. These cases could have been preventable if communities had been vaccinated, but the Amish do hold strong religious beliefs against modern innovations including medicine.

With the expanding use of the Internet and social media platforms, more misinformation regarding vaccinations have spread, but not all misinformation comes from Facebook propaganda. The distribution of The Vaccine Safety Handbook has been credited as another factor that provoked the anti-vaxxer movement. Parents Educating & Advocating for Children’s Health (PEACH) is the interest group that published the handbook pushing anti-vaccine philosophy using the autism argument, conspiracy theories, and old, inaccurate information. Although Jewish journals and rabbis have advocated for vaccination, ultra-Orthodox members that hold specific religious views against using it. PEACH, a Brooklyn-based Jewish organization, targets the Orthodox community which in New York are based in Williamsburg and Borough Park. As of June 17, 2019, Brooklyn and Queens host 596 of the nation’s measles cases (more than half of the 981), most of them coming from Brooklyn’s Orthodox Jewish community. Several yeshivas in Williamsburg have been closed for not following the DOH’s order to not let students with measles attend. Even one yeshiva school two miles from Francis Lewis has been closed for not complying.

The NYC Department of Health and Education take these issues seriously. On May 7, 2019, DOE Office of School Health’s Chief Executive Officer Roger Platt released a notice acknowledging two measles cases in the public school system, but noted that the students did not attend school with the disease. Platt also urged parents to vaccinate their children if they hadn’t already as it is a DOE requirement. On April 9, I myself received a letter that warned me that I would not be allowed to attend school if I did not have proof of having my Meningococcal Conjugate vaccination. I’ve already received it in November 2017, so I submitted a copy of my immunization record to the Nurse’s Office just as and my clinic sent a digital version to them. I was scared when I read the letter because I knew I had all of my vaccinations, and I absolutely did not want to miss out on my education. Regardless of the disease at hand, I applaud the DOE and the DOH’s efforts to keep our schools safe. It would be horrible if we had a student who was infected with the measles to spread the disease to unvaccinated students.

There are people who fear that vaccines will do more harm to one’s health than help them, but they should learn to trust the science behind vaccines. Teenagers like Ethan Lindenberger have stood up and vaccinated themselves despite the wishes of their parents. It’s understandable that our parents want us to be safe, but it won’t do any good if a disease spreads and affects us because of our parents’ choice. I have two young cousins, ages four and six, in Rockland County, and area that has been dealing with its own measles epidemic and had its vaccine enforcement policies revoked. I despise the idea of seeing them or other young children suffering from a disease if they haven’t been vaccinated.

With that said, there are students who unable to get vaccinated like those who have compromised immune systems or are immunosuppressed due to medical treatments like chemotherapy or other diseases like cancer. Those students are exempted, but the inability to get vaccinated still leaves them vulnerable to catching measles. It should be noted that families that hold certain religious beliefs can have their children exempted if the letter they send to the DOE fits certain criteria, but that also leaves them vulnerable to catching measles. Assembly members pushed for a bill that would repeal the religious exemption and invited immunosuppressed students to talk about their fear of catching measles from students who can be vaccinated but have chosen not to. Parents have protested that this bill violated the First Amendment’s Free Exercise Clause, but those arguing also include those in the anti-vaxxer movement. When passed, more students would receive immunity to measles and reduce the risk for immunosuppressed students, and if not, both groups are more vulnerable to the dangers of measles. As of June 13, this bill has been signed by Gov. Cuomo, but anti-vaxxers are still citing the First Amendment.

Could this situation have been dealt with sooner? Yes. Back in October 2018, Francis Lewis News reporters Selina Lin and Joshua Pimental asked students and nurses around the school about their take on the measles epidemic which back then had only 133 confirmed cases in New York City. Once again, there are currently 596 cases.

“To me, it makes no sense why anyone would not take a vaccine,” senior Nick Martinez said back in October. “Without getting proper shots, they cause an even larger risk for the entire community.”

The risk has become larger to the point that it has become a record high. Please get vaccinated to prevent this number from getting even higher.