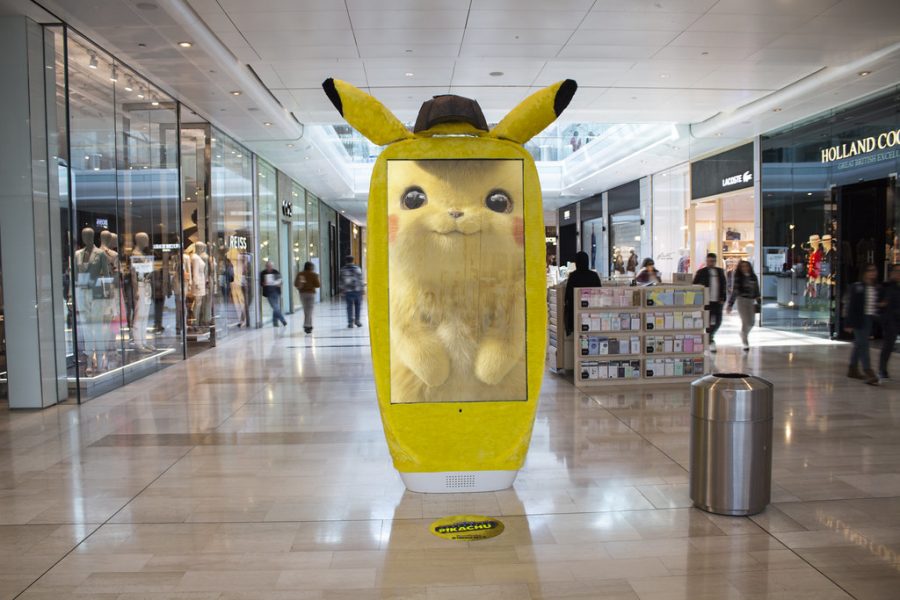 The movie begins with Tim Goodman learning that his father has died in a car crash after he and his friend Jack attempt to a catch a Cubone. Tim travels back to Ryme City, where his father lived, to make peace. Upon return to Harry’s apartment, Tim is questioned by junior reporter Lucy Stevens, who is suspicious of Harry’s death, but Tim brushes her off.

I find the character relationship between Tim and Detective Yoshida very realistic.  When Yoshida is trying to console Tim after the loss of his father, Yoisha tells Tim that he was always on his father’s mind to let him know that his father cared about him. However, Tim is trying to move on and accept reality for what it is. This is shown when Tim comes for the keys from Detective Yoshida and respectfully dismisses his attempts to comfort him.

Tim explores Harry’s apartment, finds a vial releasing a purple gas, and opens a window to air out the room. The gas doesn’t affect Tim, but instead a group of Aipom outside the window. Then, Tim finds a Pikachu in Harry’s apartment that begins to talk to a bewildered Tim.  Soon after, a crazed Aipom attacks Tim and a group of Aipom chase Tim in a trash chute where he proceeds to run onto the street yelling “rabid Aipoms” with no pants.

This scene in the movie is one of the most amusing because of the chaos that surrounding Tim.  When Tim learns he can talk to Pikachu, he does his best to deny it,  yet he has no time to come to terms with this realization because he is attacked by the “rabid Aipom”.

Tim soon learns that the talking Pikachu was Harry’s Pokemon partner. Pikachu tells Tim that he has no memory of what happened and thus decides to look for Harry. They decide to seek out Lucy Stevens, a junior reporter, who gives them a lead to visit the docks and find Harry’s informant, Mr. Mime. Pikachu and Tim are unable to figure how to make him talk until Tim pulls out some of his own mime tricks.

When it comes to Pokemon in the real world, most are hard to imagine because we want them to have the same appearance they have in the anime, but may seem odd or grotesque instead. This movie has done a great job bringing these characters to life, especially Mr. Mime.  Certain aspects of Mr. Mime’s appearance, such as his shoulder balls, share a resemblance to dodge balls. I find Mr.Mime’s appearance to be very unique in that most of the Pokemon we’ve seen either have fur, a skin, or scale-like texture.

After they get the information needed, they check out the round house where someone is selling “R”.  Pikachu meets an old acquaintance that he beat and now has to beat them again. After finding out “R” comes from the “Doctor” they are brought back to Ryme City Police department where the Duo is dealt a crushing blow upon seeing the footage of Harry’s deathly car crash.

This movie in unique in that it showcases Pokemon in the real word, but there is something that cannot be ignored: The Talking Pikachu. The voice acting for the talking Pikachu is done extremely well by Ryan Reynolds. The way Pikachu speaks and acts reflects effectively from his voice, as his tone matches when he is scared, when he is desperate, and when he is cracking a wise joke.  In addition, having Reynolds play Pikachu is quite funny, as my favorite line has to be “Oh my God this amazing, You can understand me, I’ve been so lonely.”

After learning that his father might truly be dead, a strange woman brings Tim and Pikachu to Howard Clifford, who knew his father. There they learn that Harry is still alive from Howard’s “advanced Holographic Imaging”. Howard asks Tim to investigate his son so they enlist the help of Lucy Stevens once again and investigate one of Roger’s Pokemon Research Facilities.  They find Pokemon being experimented on and thus try to escape while being chased by Greninja, but along the way Pikachu gets injured. They seek out help from Pokemon and are led to Mewtwo. After returning to Ryme city, Howard is revealed to be the true villain as he wants to merge people with Pokemon by switching minds with Mewtwo. Mewtwo Roger fights with Pikachu while Tim unplugs Howard from Mewtwo. Ultimately, everyone returns to normal and it is revealed that Tim’s father, Harry, was merged with Pikachu. Tim then decides to stay in Ryme city with his father.

Detective Pikachu is an extraordinary movie that everyone can enjoy and the film is a huge step for the Pokemon franchise.  Character dynamics between characters is exceptional and characters such as Tim and Yoshida are very realistic. Additionally, comedy throughout the movie is abundant with comedic gags done by Pokemon and Ryan Reynolds, Pikachu’s voice actor, cracking a wise joke as a fluffy Pokemon. Then again, let’s not forget the amazing graphics portrayal of Pokemon in the real world. Rating this movie out of 10 deerstalker hats, I give it 8 deerstalker hats.