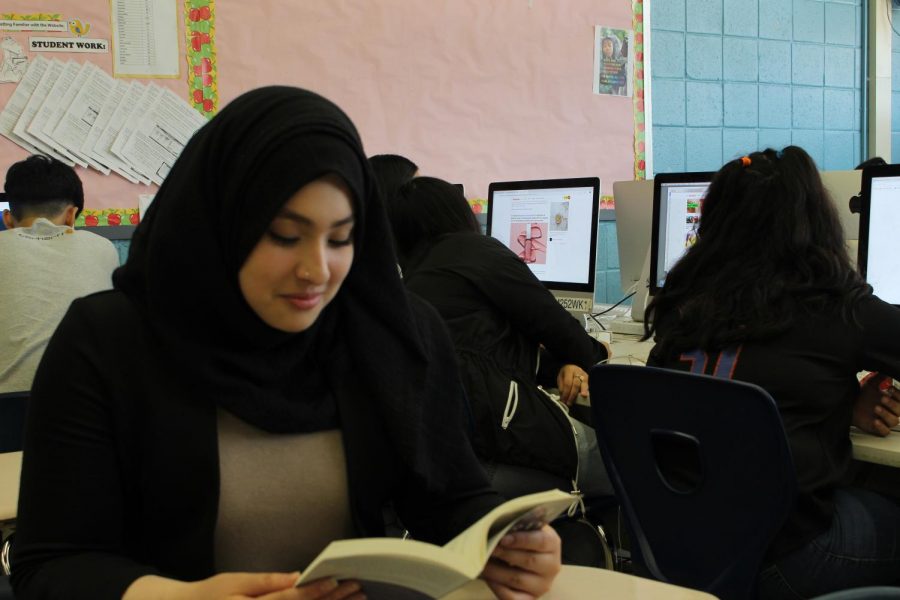 The abrupt and piercing ringing of an alarm clock breaks the silence of the dark room, signaling the beginning of the day. It’s four in the morning and time for suhoor, the period before dawn when people observing Ramadan will eat before commencing their daily fasts that lasts approximately 15 hours. The start of Ramadan – the holy ninth month of the Muslim calendar dedicated to spiritual reflection, worship, and fasting – began earlier this year on the evening of May 5. During this month, a majority of Muslim students abstain from food and drink, including water, during the day.

Around this time, students are also preparing for the exams heading their way, including AP exams, SAT subject tests, finals, and Regent exams. For the many Muslim students who are abstaining from eating and drinking, exam season is more stressful than usual due to their hunger.

“It’s very challenging because my throat is so dry,” said Arezo Rasabzada, a sophomore. “I can’t even eat breakfast, so I’m exhausted during a test. I’m probably not going to get the best grades.”

Aqsa Pirzada, a sophomore, agrees that taking exams and studying can be challenging when fasting.

“Retaining information, when all you can think about is how hungry you are, is a difficult task,” said Pirzada. “It results in low performance from the student. It becomes hard enough to stay awake. When we are told we have to take tests that count heavily, the pressure becomes overwhelming.”

Studies from the Frontiers in Human Neuroscience journal and the Nutrition Research Reviews have found that students who eat breakfast reap positive results on their test performance compared to students who opt out of eating. Not only does eating play an important role in exam performances, but so does remaining hydrated. In fact, a study conducted by the Institute of Psychiatry in London and the MRC Cognition and Brain Sciences Unit in Cambridge reported that dehydration may lead to teenagers’ brains working less efficiently, thus impacting their test performance. The United Kingdom’s National Health Service (NHS) even stated that low levels of dehydration can cause symptoms including headaches, dizziness and weakness in muscles. And in serious conditions, it can cause low blood pressure, increase heart rate and even unconsciousness.

“Getting to school can be difficult,” sophomore Omid Hamidi said. “Since I walk to school I get thirsty and hungry and when I get to class I can get distracted.”

For many students who are fasting during Ramadan, going to the cafeteria, where they are surrounded by others eating, can also pose a challenge.

“When I’m in school and I see my friends eating, it’s really complicated,” sophomore Tanjem Rahman said. “I feel so isolated because they’re eating and enjoying their food, having so much energy, and I’m just here feeling upset and overwhelmed.”

Being surrounded by food while fasting can also affect one’s physical health. The NHS reported that people who are fasting are likely to prompt their brains into producing more stomach acid, by looking or even thinking about food, which in turn can lead to heartburn. To avoid breaking the fast, some students choose to go to places other than the student cafeteria, such as the library, which tends to get full fast. Francis Lewis has recently opened the auditorium to all students starting third period, which has acted as another option for students observing Ramadan. However, some students say this is not an effective solution.

“Avoiding the lunch room alone is almost always impossible, the library gets too full too quick and usually the auditorium is used for classes making it inevitable for kids that are fasting to be around food” said Pirzada.

Similarly, Junior Reserve Training Corps (JROTC) classes have also offer accommodations to students who are fasting. They excuse them from partaking in physical training, marching practice, and also from marching in the Memorial Day parade. During periods when JROTC classes take place outside, instructors allow fasting students to sit on the bleachers.

“It’s just JROTC that I actually have to do work and they are letting me be excused from it,” sophomore Arezo Rasabzada said. “They let me take breaks because it’s harsh in hot weather.”

However, not every class provides arrangements for Muslim students. For instance, some gym classes instead tell students to complete the exercises to the best of their ability.

“In gym, we have to run a lot of laps,” sophomore Ryema Shafi said. “On one particular day, I was fasting and we had to run. Even when I told him I was fasting, he kept telling me to do it and try my best.”

Fasting is just one of the five pillars of Islam. During the month-long celebration, it is also highly encouraged that people donate to charity and be more generous. Eid al-Fitr, or the three-day celebration of the Breaking of the Fast, marks the end of their month long journey. During this celebration, families and friends come together to exchange gifts and share meals as a time of giving thanks and forgiveness.

“I would always think about how crazy it would be to not eat from sunrise to sunset but I kind of understand it now,” Rahman said.  ”Eid is very special because it shows how Muslims are able to go through these obstacles of fasting and that we’re capable of having strength, no matter what we go through.”