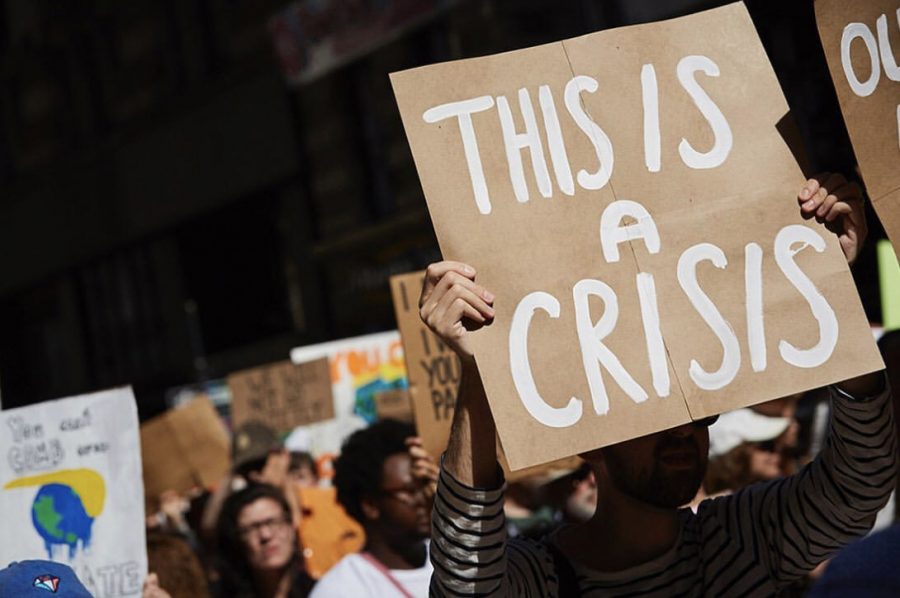 A protestor's sign raises the urgency of the climate change crisis.

Poster signs filled the sea of 250,000 protestors, mostly students, as they climbed treetops, stood on benches, roared at the top of their lungs and wiped their sweat. Feet poured toward the stage in Battery Park as Greta Thunberg, 16, her voice loud and clear, delivered her speech three days before the United Nations Climate Change Conference.

Students at Francis Lewis High School were among the protesters at the rally, which took place on Friday, September 20 in Foley Square, City Hall and Battery Park.  The protest was a call to arms to address people contributing to climate change.

Thunberg, who led the largest global student-led climate change movement in history, has gained attention as a climate change activist for young people.

“We will make them hear us,” Thunberg said during her speech in Battery Park. “We have not taken to the streets, sacrificing our education for the adults and politicians to take selfies with us and tell us that they really admire what we do.”

Athina Halkiadakis, a junior at Francis Lewis, voiced concern about the inactivity of the government.

“I want politicians to realize what they’re doing,” Halkiadakis said. “I want them to see that if they don’t start acting like adults, we will.”

Halkiadakis was most pressed by how climate change will affect how she lives.

“We might not even get the chance to grow up and have kids,” Halkiadakis added. “It’s a huge problem and they’re not doing anything.”

A survey by the Washington Post-Kaiser Family Foundation shows 7 in 10 teenagers agree climate change will moderately or greatly affect their generation, so this is a common sentiment shared by Generation Z.

Fatimah Kihulo, a junior at Francis Lewis, felt obligated to attend the strike.

“I feel so happy being here and representing Francis Lewis,” Kihulo said. “I think it’s unfortunate climate change is being ignored by so many officials that we are supposed to be looking up to and following.”

Kaya, 14, a student protestor who declined to give her last name, said President Donald Trump should not see Gen Z as “irrelevant.”

“I want to see our president actually show that he cares about this issue and open his eyes and more opportunities to help this cause,” she said.

Rally participant Gladis Paltadono accompanied her son to the rally, who insisted that she go with him.

“I think it’s very important for me to support this cause for me and my son,” Paltadono said. “We need to do something for the future or else these kids won’t have one to look forward to.”

Principal Dr. Marmor approved of students going to the climate change demonstration, saying it is a teaching moment for student advocacy.

“One of the most important things that schools can teach their youngsters is to think for themselves and advocate for themselves,” Dr. Marmor said.

Thunberg said young people will continue to unite to call for action.

“If you belong to that small group of people who feel threatened by us, then we have some very bad news for you because this is only the beginning,” Thunberg added. “We are a wave of change. Together and united, we are unstoppable.”