Can One Minute Make a Difference? 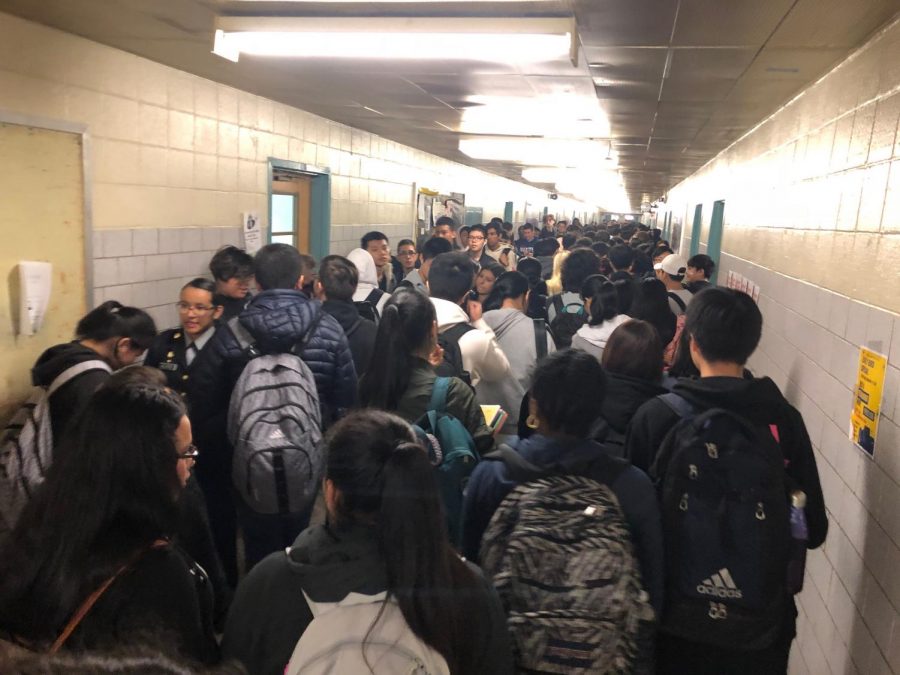 Students are moving through the second floor hallway between period 7th and 8th period.

The first bell echoes throughout the school as the narrow hallways are immediately crowded with thousands of students trying to get to their next class.  The pushing and shoving is unbearable as each minute only allows students to walk a short distance to their next class, sometimes not even reaching half the distance required to arrive before the second bell.

The limited time to get between classes disrupts the mobility of students to get to their destination, causing lateness and inconvenience.

“It’s very hard to travel [to class] in 4 minutes since there are a lot of people in our school,” junior Alvin Ma said. “It’s overcrowded, and really difficult to push people, and it’s also very disrespectful.”

Some students believe that an extra minute added between classes would make a huge difference.

“It should be five minutes,” junior Virgil Liu said. “Everyone needs more time since everyone’s bumping into each other in the halls.  A lot of people are coming from the other side [of the school].  One minute can save a lot [of time].”

However, according to Principal Dr. Marmor, Francis Lewis tried allotting 5 minutes between classes approximately 4 years ago but there were negative effects from giving more time.

“When we had 5 minutes we saw a lot of kids just hanging out in the hallways and waiting for the late bell before going to class,” Dr. Marmor said. “When you have people stopping in the hallway, texting to friends, socializing, it gets very dangerous. We decided to go for 4 minutes and added the extra minute to your class, so you have time with your teacher.”

In addition to the constant maneuvering through the hallways, some students are traveling from opposite sides of the campus and struggling to arrive to their next class on time.

“I have a class in the computer lab on the third floor, which is near the lobby section of the school, but on the upper floors,” junior Julie Liu said. “I have to run to the trailers outside.”

Dr. Marmor believes that difficulty getting to class is more prominent in the beginning of the school year as freshmen are still navigating their way to each classroom.

“One of the things that happens every time this year is that we have 4,500 kids and about 1,100 kids are freshmen, which is almost a quarter,” Dr. Marmor said. “[At the] beginning of every year, freshmen don’t know where they’re going, so most congregate the center stairway, as it’s the most obvious place to go.”

English teacher Ms. Berg also believes that 4 minutes between classes should be enough time for students to arrive to their next class on time.

“I feel that most students are able to get to class on time – or close to on time – if they really try,” Ms. Berg said. “Most of the teachers I know understand that students must pack up and leave the room with enough time to make it to their next class.”

In order to alleviate the crowded hallways between classes, Dr. Marmor said some measures have been taken.

“Ultimately, 4 minutes should be enough for most kids,” Dr. Marmor said. “[If] there are some cases where someone has some legitimate trouble, they can come to us [and] we will try to help out.”