FLHS Alumna Creates a Pop Up Food Stand for Charity 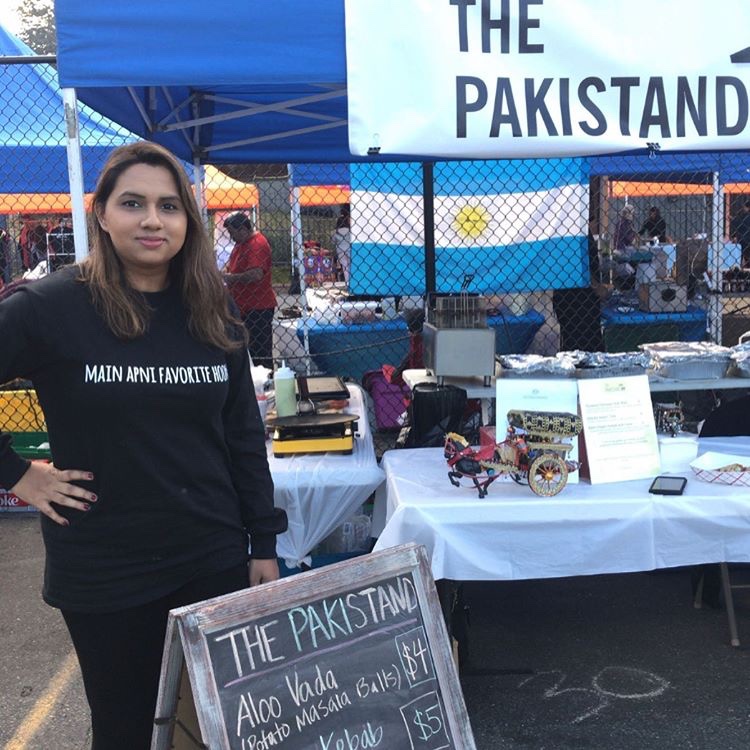 Francis Lewis alumna Maeda Qureshi has started a pop up food stand in Queens, where she fuses Pakistani and Mexican food. One hundred percent of the profits go towards projects supporting childhood education in Pakistan.

Ever since Qureshi was young she wanted to make cooking her profession.

“I was interested in culinary arts, like working as a chef, since I was five,” Qureshi said. “I used to watch Food Network growing up a lot, Bobby Flay, Tyler Florence, the old school people. I used to see what I liked and then used to make it at home. Not everything was a success, actually 50% of the food I made was disastrous.”

Her parents always encouraged her to help others and this inspired her to donate the profits from the food stand.

“It was that idea of giving back, but also doing what I love,” Qureshi said. “I love to cook, but I also wanted to donate to charity, so that was the idea.”

Qureshi decided to create a Pakistani and Mexican fusion cuisine.  Although she is Pakistani, she also worked for Aaron Sanchez, who was on Chopped and now Masterchef.  He taught her how to make Mexican food so she applied what she learned from him.

“I wasn’t planning on it being a Mexican fusion but for some reason it became that because I worked in a Mexican restaurant after college,” Qureshi said. “I think I was really inspired by the flavors, but I do like anything.  In my other menu I do potato croquettes, which is more Spanish and French.”

Qureshi donates to two charities, both of which support childhood education in Pakistan, where it is much harder for families to afford education since all schools must be paid for.

“One of the charities, the Zindagi Trust, helps kids get off the street by paying them to come to school,” Qureshi said.  “In the city area, kids can’t afford to go to school [and] their parents can’t afford to send them to school, so they’re on the streets selling stuff.  They just don’t go.”

Qureshi has always been close with the Zindagi Trust, and even though she found out about the other charity recently, she splits the profits from the stand evenly to both charities.

“The other one, the Citizens Foundation, I actually found out about 3 years ago,” Qureshi added. “They’ve done a lot of work in rural areas where there’s no city life. Girls’ education is really a problem [so] they try to get girls into schools.”

Previously, Qureshi worked as a nutrition and culinary educator for the Department of Health. This involved working at farmer’s markets in low income areas and providing nutrition in culinary education to people in the community.  She now works as a clinical dietitian at a hospital.

“I work in the ICU setting,” Qureshi said.  “Patients – this is kind of grim – that are intubated or in very critical condition can’t eat but need some sort of nutrition, so it’s usually nutrition through the tube.  What I do is I look at their labs, talk to doctors, and see based off of their condition which formula to use.”

This job involves a different form of nutrition that is more clinical and science based. Even though she loves what she does, Qureshi says it’s difficult to balance her full time job with the food stand.

“I have a calendar, kind of like a game plan of what to do,” Qureshi added.  “For example, I have two events back to back this Saturday, [so] I divide it up. This is something I learned from culinary school, plan out your day or week.”

At first her parents weren’t all that supportive of her culinary aspirations. Although initially she wanted to please her parents, she finally decided to follow her dreams.

“I really wanted to go to culinary institute, but my parents were kind of forcing me not to go and just to make them happy I [went] to City College,” Qureshi said. “I did that for one semester, but in the back of my mind I remembered what Mr. Ridel said, ‘Don’t worry about what people say, just go for what you dream of, your passion.’”

During her time at City College she felt a bit miserable, so she was happy to leave.  Her parents also came to the conclusion that they didn’t want Qureshi to blame them for her life and finally accepted her passion.

“I used to come home every weekend and I was excited to teach them what I learned,” Qureshi added. “When they saw how happy I was, then they kind of understood and I think that’s when they were happy.”

Qureshi understood where her parents were coming from, but she definitely felt gratified from her decision. She ended up earning a master’s degree related to culinary arts, which enabled her to further her experience in the field.

“I think right now, I’m the most content in my life, because I got the best of both worlds,” Qureshi said.  “I got a culinary degree, [which] I could still apply, but I also have a pretty decent job.”