An Inside Look at the JROTC Academy 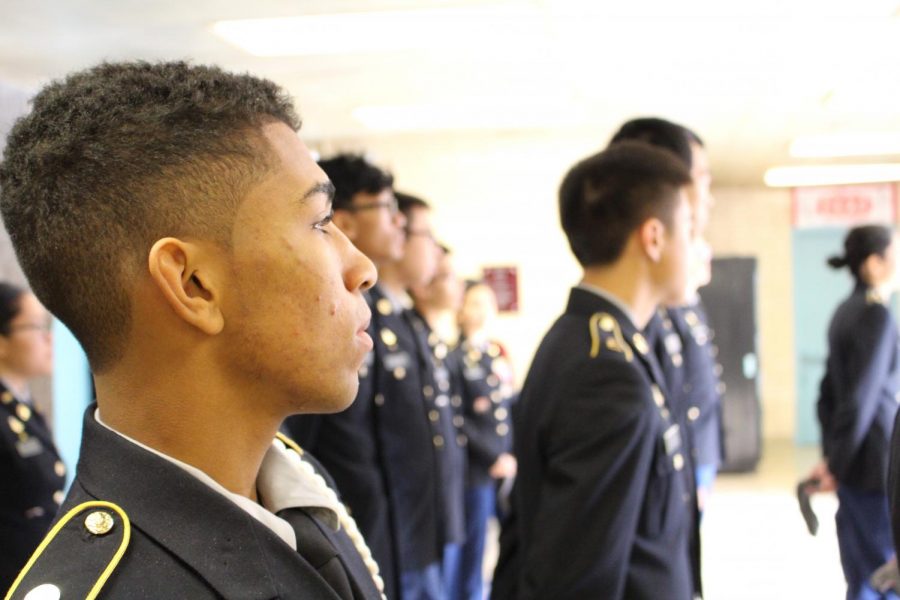 Like a school of fish, a blur of navy blue jackets littered with shiny metals rush past you. Amidst the mumbling, you catch snippets of their conversation: inspection, colonel, military ball. Your mind wanders as you ponder what being in JROTC actually entails. The bell rings and they rush into class, out of sight and out of mind for the time being.

For many, Wednesday mornings consist of lazily dragging yourself out of bed, into the easiest attire, and to first period. This isn’t the case, however, for hundreds of Junior Reserve Officers.  For many of them, alarms are set before dawn and after-school practices are a weekly, sometimes daily, occurrence. Surprisingly, some wouldn’t have it any other way.

“I think if I didn’t have JROTC, I would not know as many people as I do now,” senior Michaelangelo Tenorio said. “A lot of people talk about it, especially if they’re on a team. It feels like family.”

JROTC is a program that teaches students character and leadership potential.  Yet, insight on life within the academy provides a more manageable view of the hardships and intricacies of each role. For instance, CNS is a FLHS initiative in which students are placed in charge of a small cadet group. Additionally, JROTC members can climb the ranks of their respective battalions through various staff positions. Higher positions, however, are met with overwhelming responsibility.

“It’s extremely mentally draining,” former Cadet Captain Sarahi Hernandez said. “If you’re in a high position like me, the standards are pretty high.”

Senior Jessie Yu is one of the commanders of the Patriot Guard Armed Drill Team.  The program has given her the opportunity to lead as well as manage her time. On top of practicing six days a week, she maintains an A average.

“Now that I’m in my 4th year of JROTC, I feel a great deal of pride,” Yu said. “My medals represent the blood, sweat, and tears at practice that allowed my team to have a significant amount of accomplishments when competing nationally.”

Lieutenant Colonel Lahood, a leading Army Instructor, remembers starting off his seven years at FLHS with approximately 1,100 cadets.  However, concerns over the student-instructor ratio caused a decrease in the permitted amount. Over the past 2 years, the program has maintained an impressive 900 to 950 members.

“It fluctuates by about 50 cadets depending on the year,” Colonel Lahood said. “We’ve reached a steady state where our progression has maintained that level of enrollment, which is a good instructor ratio.”

Although JROTC provides students with the opportunity to thrive in leadership roles and discover their potential, some students struggle with the experience.

“I used to have to put staff above other classes,” senior Helen Li said. “Same with family and other things outside of school. JROTC is one of those things that kind of forces you into putting it above everything else.”

The difficult aspects of the program are especially visible when considering members such as Hernandez, a previous cadet captain who describes focusing so much on JROTC, that she’s “forgetting about college” and the application process. Since her interview, Hernandez has dropped out of JROTC.  Unfortunately, the program’s rigid requirements were taking an immense toll on both her mental and physical health.

“I started losing weight drastically, to the point where I was underweight,” Hernandez said.  “My parents would notice a change in my behavior. I would just lash out at them.”

Li believes that in order to improve the cadet experience, communication between the Army Instructors and student cadets must improve. Personalized relationships are one of the many ways this can be made possible.

Widely recognized as an exceptional program, JROTC educates students on everything from character development to wellness and leadership. However, while many students boast the incredible years they spent in the Academy, some deny having had that experience at all.  While JROTC may not be for everyone, Hernandez implies the experience is essentially what you personally make of it.

“If you’re strong headed–if you know how to manage your stuff, then do it,” Hernandez said. “Exceed expectations. If you’re somewhat doubtful in a way or you’re very sensitive, like me, you’re going to hurt yourself in the long run.”