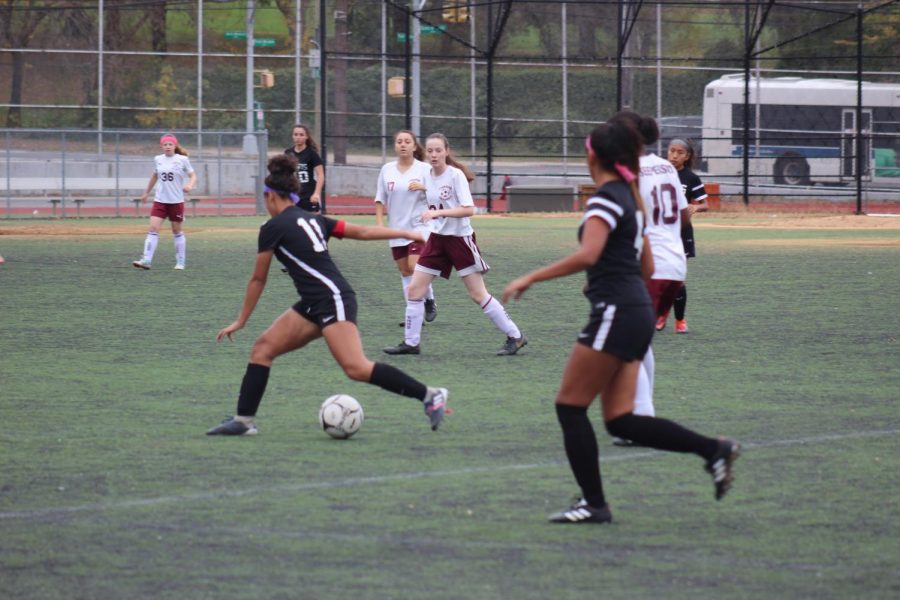 Cabral advances towards the goal, scoring her first goal of the playoff season.

The cleats she ties on the field are much bigger now than they were 12 years ago. Her muscles are the sorest that they have ever been, yet she finds any way to ignite a fire under herself. She takes the field, the 11 on her jersey is brighter than ever.

Girls’ Varsity Soccer Co-Captain Alyssa Cabral made the team her freshman year and has played under Coach Sotiriou ever since. Although the past three years have been some of her most competitive, her soccer career began almost a decade earlier.

“I started playing soccer at 4 years old,” Cabral recalled. “I have two older sisters who played soccer as well. Ever since I was born I was at all of their soccer games, watching them play until I was eventually able to play myself.”

Alyssa’s two older sisters, Amberly and April, had a major role in initiating her soccer career. Both of her sisters attended Francis Lewis and were captains in previous years.

“I’m three years apart from my second oldest sister, so when I was a freshman she was a senior,” Cabral explained. “She encouraged me to tryout for the team and just having her there on the team was a gateway into the team itself, opening up and being friends with everybody, because she knew everybody already.”

Her sisters also impacted her life growing up. As Alyssa’s role models, they set an example of what being a good student athlete looked like along with being the older sisters she needed.

“As I got older they would teach me things,” Cabral said. “They would talk to me whenever I needed help, when I wasn’t on good terms with my parents, or just basic sibling stuff like them standing up for me and encouraging me overall.”

Following in her sisters’ footsteps, Alyssa is now co-captain of the Girls’ Varsity Soccer team, along with senior Annalie Guzzo.

“Making her a captain was one of the easiest decisions I’ve had to make,” Coach Sotiriou said. “There was no doubt in my mind that she would step up and lead this team. Her commitment to this team has not gone unnoticed and she absolutely deserved the title of captain.”

Alyssa’s role as mid-center this year is vital to the team’s success. With 22 assists and 23 goals scored, she is the playmaker and it is her “job to determine the pace of the game while attacking and defending simultaneously.”

“Alyssa is very dedicated and committed to this team,” Coach Sotiriou added. “Her drive to succeed is contagious. Not only is she an amazing soccer player but she is an excellent student.”

Balancing sports and academics is a common struggle for student athletes, and Cabral’s experience on the team is no exception.

“One of my biggest challenges during the high school season is managing both school and soccer,” Cabral explained. “I genuinely struggle maintaining my grades in my classes given how physically tired I am and how little time I have.”

Alyssa has also excelled at maintaining positive relationships with her teammates as her experience as captain benefitted her teammates in many ways.

In addition to the support she receives from her teammates and coach, her family’s role in her life as a student athlete is just as important.

“My family has supported me tremendously during my soccer career,” Cabral said.  “If it weren’t for them, driving me to basically every game and practice, and financially and mentally supporting me, soccer wouldn’t even be an option for me