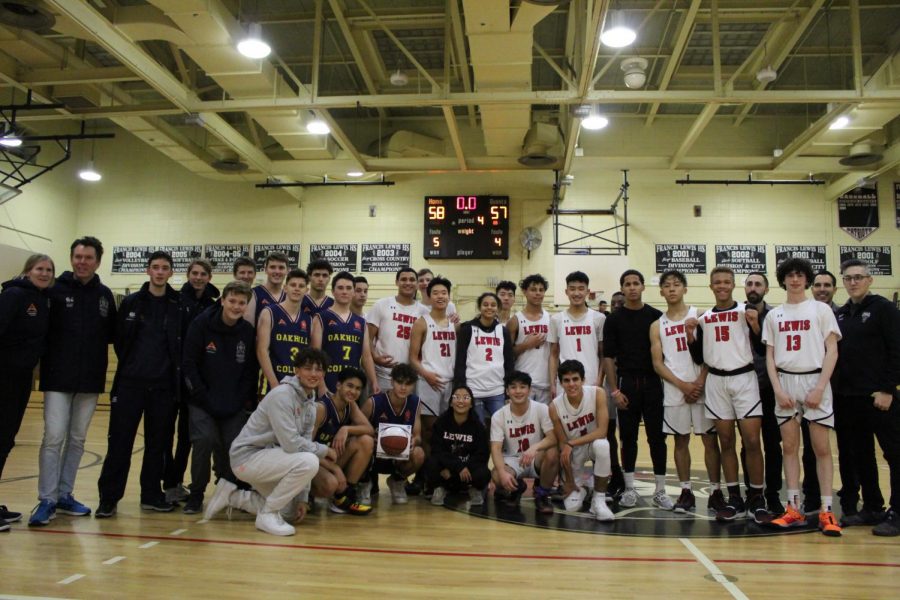 The Francis Lewis basketball program hosted two games for Australian Basketball teams from Oakhill College on December 18 in which they were able to face off with the junior varsity teams from Thomas A. Edison and Francis Lewis High Schools.

Incidentally, this was not their first game with Francis Lewis. The Australian teams come to the United States every two years as part of a program to play different high schools across the country.

“Coach Ciarleglio put me in contact with their coach,” Boys’ Junior Varsity Basketball Coach Ardis explained. “Coach C. has been such a great support for our program, and since he has a lot of experience coaching at this level, he always makes sure to share any great opportunities like this one to us.”

“I think we could’ve played better, especially in the first half,” sophomore Brendan Lee said. “We played well enough to get the win. They were much better than their JV team but I feel that the game shouldn’t have been close at all.”

After leaving the first quarter tied 12-12, the Patriots ended the first half down by 10 with a score of 17-27.  Francis Lewis scored 41 points in the second half and secured the win when sophomore Grant Lee made a three pointer with seconds left to put the Patriots in the lead by one point.

“I was really lucky,” Lee said. “I got open for a three and I just took it since there were only a few seconds left in the game.”

Oakhill experienced a setback as one of their players suffered a head injury during the second half of the game.

“I am just happy the player was ok,” Coach Ardis said. “No one ever wants any player to get injured, and I was more concerned with the health of the player than the score of the game at that point. Once I knew he was ok and in great hands with Coach Marando and the staff from Oakhill, I felt a lot better. He is a great player and was doing really well for his team. Thankfully he was able to get the help he needed and travel the next day safely.”

This game was beneficial to the Patriots as it allowed them to develop their skills in an environment that did not place as much pressure as their usual setting.

The experience of meeting and interacting with athletes from a different country exposed the team to a new level of competition.

“They were a good change of pace,” Park said. “Meeting new guys from across the world was really interesting– how they spoke was different and interesting. They were all so tall and very structured for the game on the court.”

The visiting teams introduced Francis Lewis to new ways of strategizing during game play, along with shedding a new light on what it’s like to be a student athlete.

“I hope it is something all students involved remember for the rest of their lives,” Coach Ardis said. “The significance of this game was never really about the score for us, but just an opportunity to continue to learn and grow as student athletes, both athletically and socially.”

The Patriots were not only able to share a game of basketball, but were matched with boys who live the same lives as them, on the complete opposite side of the world.

“I thought it was a once in a lifetime experience for them,” Coach Ardis expressed. “Being able to compete against a team from the other side of the world is amazing, but what was even better was having the opportunity for our students to meet other people and learn about their culture.  It was great to see everyone hanging out and interacting with each other after the game was over.”