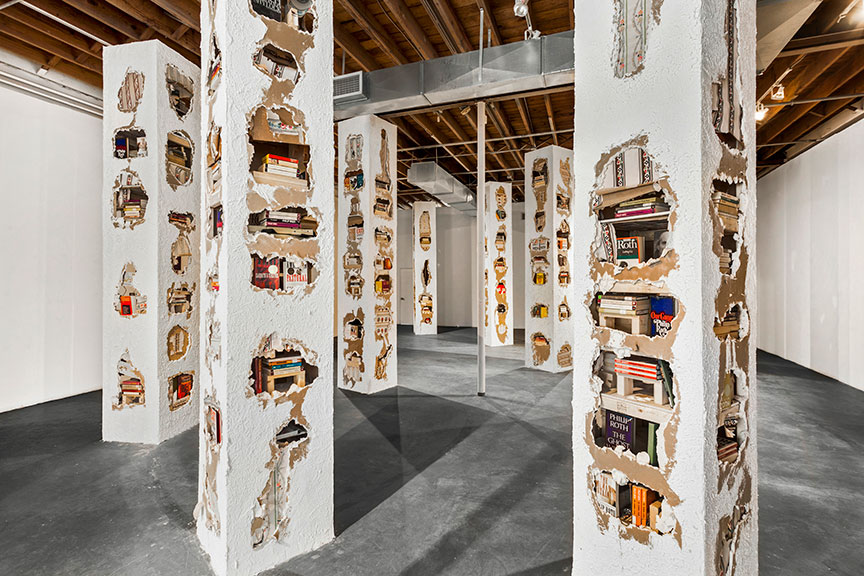 The Public Art for Public Schools program commissioned artist Bryan Zanisnik, 40, to collect objects that represent the academies and programs at Francis Lewis High School for his mural.

In response to the annex expected to be built by September 2021, the program under the New York City School Construction Authority requested that Zanisnik hold workshops with students on the artwork.

“The work is going to be very personal to the past, present and future of our school,” Principal Dr. Marmor said, who explained that a panel of six different groups voted on an artist, one of which was the school.

Dr. Marmor cited the effort of choosing a muralist as “collaborative” to reflect student voice.

“As the process went forward screening 10 to 12 different artists, it got narrowed down and the committee eventually voted to choose Zanisnik,” Dr. Marmor added. “Every group in the school is going to have an opportunity to find anything they want that they think represents their group.”

Zanisnik said he would get things from the basement and from the academies that the school “doesn’t really pay attention to anymore.”

“The basement’s filled with all these old uniforms and trophies, and there’s even a room full of old theater props that are decades old,” Zanisnik said. “Once I collect all these materials, then I’m going to build a huge sculpture, a huge installation in my studio. I’m going to have it photographed.”

Zanisnik said the height will allow staff and students to live through the school vicariously.

“It’s going to be really high so that people could get in and see all the objects, and it’s a way of telling the story of Francis Lewis but not in a traditional sense,” Zanisnik said. “You can always go on Wikipedia and look up this school, but we have art to represent its story.”

Zanisnik reflected on the message the mural will tell.

“I’m interested in telling a story that doesn’t necessarily describe the historical sense of the school but more of what happens throughout the school,” Zanisnik added.

Zanisnik told FLHSNews his biggest struggle is reinventing his work, such as his mural for the annex.

“There are a lot of artists today who really feel comfortable with making one idea work and doing it again and again, and that’s never really sat with me,” Zanisnik said. “When you step into the studio and you want to create something new, it’s like a black hole or a void. You really have to think about it; no one else can start it but you.”

Zanisnik pursued art after creating war movies and dressing up his grandmother in her husband’s military uniform during World War II.

“Art-making seemed inevitable to me because in a way it chose me more than I chose it,” Zanisnik said about his craft at 12 years old. “Years and years later, when I was in grad school, I rediscovered those movies and used those ideas in my new work. I realized I had always been interested in creating art.”

Zanisnik offered advice to aspiring artists, although he was discouraged by others saying he could have done nothing in art.

“Just go for it,” Zanisnik said about his career. “There’s so much interest in art now and so many possibilities that in today’s world, everyone loves artists and there’s so much for you to do.”