One in 5000: Sonia Rosales Rosenthal 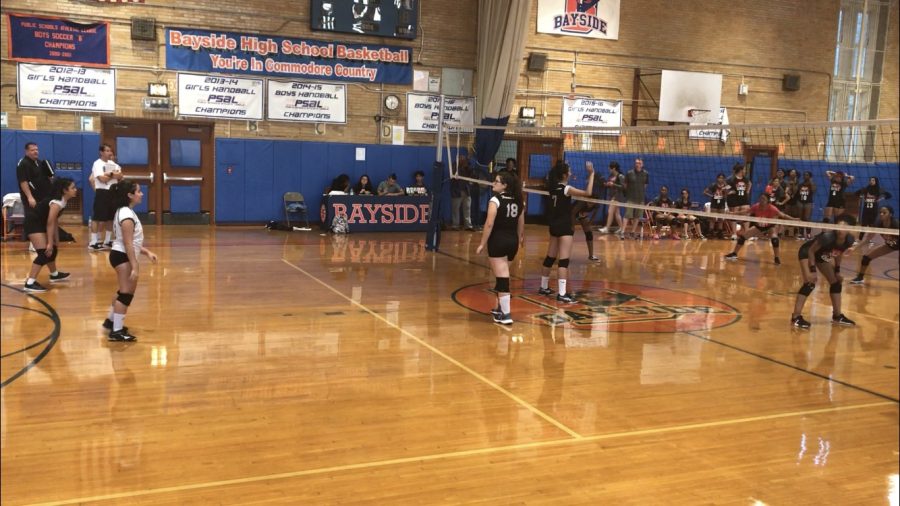 Making the Girls’ Varsity Volleyball team before school even began was just her first accomplishment as an incoming freshman as Rosenthal (18) went on to make the varsity team for softball as well.

Although her classes are done for the day at 2:50 pm when the bell rings, her day is far from over. In the next 25 minutes she changes from her everyday clothes and makes her way to the field – gear in hand. By 3:15 pm and for the next three hours, she is practicing with the Patriots Varsity Softball team. And yet, her day is still not finished. At 7 pm she is heading to another practice, and for the next three hours her focus is on volleyball.

For freshman Sonia Rosales Rosenthal, this is nothing but a typical Tuesday. Being a multi-sport student athlete, she plays on two softball teams and two volleyball teams. However, commitment to a sport is far from new to her.

“I’ve been playing baseball and t-ball since I was very young and then switched to softball about 6 years ago,” Rosenthal said.

Though softball is her main sport, with encouragement from her sister and mom, she decided to look into playing volleyball.

“The first time I played volleyball seriously was in the beginning of the 2019/2020 school year,” Rosenthal said. “I decided to try out for the team with little experience.  Then I was told because I have the background of softball I could learn quickly and the varsity coach took me on.”

In softball, Sonia’s main focus is being a catcher, which requires tremendous arm strength.

“In tryouts for volleyball the coach had us throw a basketball while kneeling on one knee to see who could throw the farthest,” Rosenthal recalled. “I threw the farthest out of all the girls because when I catch for softball I have to throw down to second base for some plays.”

In company with her power, her ball tracking skills aided her in her first volleyball season.

“She was progressing well with most skills for a 1st year player,” Girls’ Varsity Volleyball Coach Rosenbaum said. “[I am] hoping for her to develop as an outside hitter and also become a better athlete in relation to her jump and quickness.”

Making the Girls’ Varsity Volleyball team before school even began was just her first accomplishment as an incoming freshman as she went on to make the varsity team for softball as well.

“I met Sonia when she was in the 6th grade playing summer softball and I was a volunteer softball coach,” Girls’ Varsity Softball Coach Brown said. “Sonia has improved fundamentally through the years to be on the varsity team in her freshman year.”

Rosenthal’s personality and skill left lasting impressions on both her coaches and future teammates.

“My first impression of Sonia was that she was genuinely just pretty funny,” senior and Girls’ Varsity Softball teammate Nicole Kemmett said. “I thought that she was very relaxed and somebody that I would get along with well on the team. As a player I think that Sonia is very laid back in the sense that she is willing to go with the flow wherever the team needs her, which is a great characteristic.”

Though her softball season has only just started, she has a tremendous amount of support from the teammates on both teams.

“It’s nice having my sister there and it makes everything feel more familiar since we played together when we were younger,” Rosenthal explained. “We’re probably going to end up getting mad at each other every once in a while but I was her catcher for two years and we know how to play together.”

Along with being on two varsity sports teams, she has spent time learning how to play the flute and has learned over 20 pieces since starting in seventh grade.  She participates in NYSSMA (New York State School Music Association), where she is currently a level 4.

“I am beyond excited to know that Sonia is still playing,” Ms. Mistretta, Sonia’s middle school music teacher, said. “Music is all around us and there are so many forms to it. I am happy to hear Sonia is exploring her musical talents and opening up to the endless possibilities.”

Her many talents have left her with multiple options for her future, as she has taken a special interest in math and science.

“I do a mentoring program once a week called ACE,” Rosenthal said. “In this program I learn about architecture, construction, engineering and other things involved in that area of work. I get mentored by volunteers that work in these fields of work that I am learning about.”

Rosenthal has always been drawn to science.  When she was a child, she would collect rocks, acorns and dig into dirt with sticks.

“I’ve always wanted to be a scientist of some sort,” she said. “I took earth science last year and fell in love with it and now I want to be a geologist or a biologist.”

“I hope to continue to play both of my sports, hopefully at least one in college and be successful in the field I go into.”