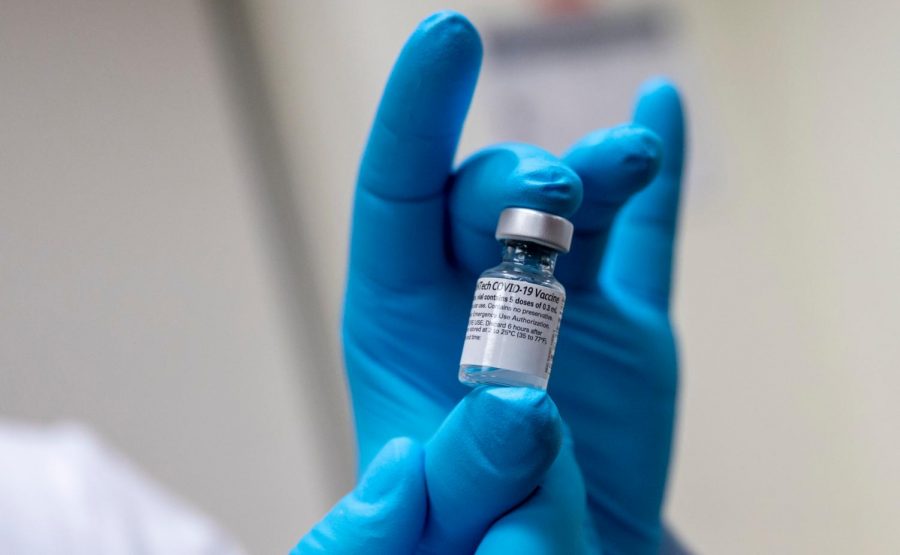 Even with the cases for Covid-19 surging, people began to consider the slim possibility of returning back to their normal lives, including students at Francis Lewis High School. As Covid-19 cases increased in the U.S., the people waited desperately for the confirmation of a vaccine. On December 11, 2020, Pfizer was one of the vaccines that was authorized by the FDA for emergency use in mid December. Moderna was authorized just a couple days later. Speculation arises as the quick formulation of the vaccine causes doubts but others start to gain hope for positive results.

“I was so thrilled,” claimed Dr. Cohen , a Science Research and AP Psychology teacher with a Ph.D. in molecular biology at Francis Lewis High School. “I know that when I was making my appointment, I was surprised at how emotional I was.

According to Dr. Cohen, teachers at Francis Lewis High School were given the opportunity to receive the vaccines. However, she asserts that masks should still be worn for the immediate future. When taking the vaccine, it only protects you from developing symptoms. However, the discontinuance of the virus will not be guaranteed.

“We have a teacher Facebook group and it’s been really fun to watch people’s reactions so people overall are really excited and trying to get appointments right away,” Cohen explained. “I know several teachers who already had theirs scheduled.”

Scientists have been using the mRNA technology for years as it is part of other treatments. With its technology being used in the development of the recent Covid vaccines, it should not be as intimidating as it seems.

“We’ve known about mRNA for a very long time. It is being used to escape trauma like treating people with physical traumas.” Dr. Cohen stated. “It’s not as new as people think. The other point I like to make to them is that most vaccines, they don’t spend years doing trials because they want to.”

However, there are many who are still skeptical. The overall development process can cause the fear of side effects in patients, which is greatly unwanted.

“I think there should be more research done,” Kelvin Yu, a junior said. “It seems rushed and this would cause distrust amongst the public.”

The vaccines were rapidly developed within a few months, leaving the public in doubt. Although it was developed quickly, it was carefully formulated with the assistance of research and science.

“[The vaccine trials] got to jump the line so the reason why it seems to be going fast is because there is a lot more funding available right now for it,” Cohen asserted.

Misinformation about the vaccines often spread throughout the media. News outlets commonly highlight news through attention-grabbing headlines. The click-worthy articles can go viral, resulting in a more amplified audience. This can also be found within social media. Even though it gains attention, it can be misleading.

“When you hear that only one person in the US clinical trial from Moderna got sick enough to go into the hospital because they received the vaccine, you don’t hear about the 3,000 people who did not,” Cohen elaborated.

Despite the distribution of vaccines, there are still concerns regarding how much of an impact it will make upon people, especially returning students to daily life. With precaution, the norm of life will be delayed until people are assured of their safety.

“It’s definitely a successful show of progress regarding vaccinations,” Alfred Lau, a senior stated. “However, it may or may not also provide false hope that school and outdoor activities may have a possible chance of returning before the summer begins.”

Regardless, it has come a long way since. It is clear that many will find it challenging to come out of this extended break but there is also hope that they will.

“We’ve all basically been experiencing really stress and trauma over the last year, living in fear, and we all have been really understanding about all that and realize it’s going to take different people different amounts of time to sort of recover from that,” Cohen stated. “I know I’m going to wear a mask until 2023.”