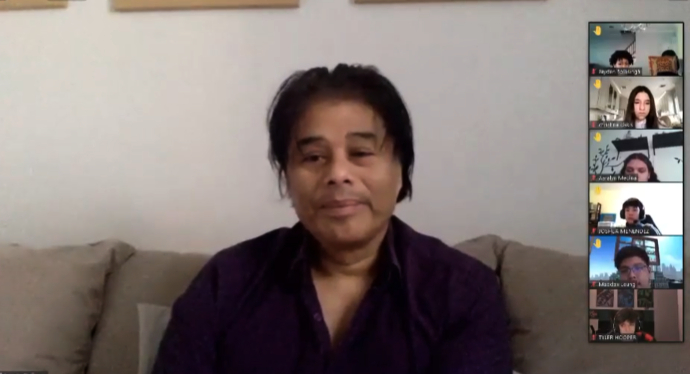 American novelist Ernesto Quiñonez visited Francis Lewis High School virtually through a school-wide Zoom event on February 8 to discuss his career and life as an author living in New York.  Quiñonez was eager to speak with his audience as students and teachers were immediately given the chance to ask Quiñonez, who is the author of Bodega Dreams, a plethora of questions about his ideologies, life experiences, and inspirations as a writer.

“It went really well,” English teacher and event coordinator Ms. Silva said.  “It’s rare for students to meet the author of the text that they’ve read. It’s important to get access to those authors, just so students can see that they are just like everyone else.”

Several students who attended the author visit have read one or more novels written by Quiñonez as part of their academic learning.

“At first, the novel [Bodega Dreams] was very confusing,” junior Fero Cekic said, “but as it continued, it got more and more fascinating because all of the events leading up to the climax was for a reason.”

Quiñonez wrote Bodega Dreams in March, 2000 and discussed his motive behind writing the story.

“Why did I write Bodega Dreams? I basically wanted to show the world my dreams, my hopes, my fears, and my loves, and that is all there in the book,” Quiñonez explained.

In addition to Bodega Dreams, Quiñonez reflected on his inspiration for writing his different works throughout his career.

“I had a lot of inspirations,” Quiñonez said. “Some professors at City College, one of them was named Edward Rivera.  He wrote a book called Family Installments, a beautiful novel about Puerto Ricans coming from Puerto Rico to El Barrio, and trying to make a living.”

Quiñonez also reflected on how his environment and community helped inspire and drive his passion to write.

“I love New York City,” Quiñonez said. “It saved me because of its art and its culture. I would go to the Upper East Side and I would go to the MET, which is one of the greatest museums in the world. There was a lot of jazz and a lot of revival theater where you could see all of these old movies.”

Ms. Silva agreed with these sentiments.

Quiñonez further emphasized that where you grow up and what you surround yourself with is vital to your writing.

“Your environment forms you,” Quiñonez added.  “If you want to be a writer, then influence yourself with stories. And it’s not just reading, even though reading is important, but growing up I would watch a lot of movies. “

“I was always in the museums seeing art, that would influence me too. I would also listen to music, different music.”

Ms. Silva teaches Bodega Dreams to her class every year because she feels that it allows students to connect with a captivating story as well as vital moments in history.

“I like the book because I can combine nonfiction with fiction, simply because we can discuss the social justice movements, prohibition, JFK, Young Lords,” Ms. Silva said.  “It can allow individuals to connect and relate to historical events.

According to Quiñonez, learning how to communicate through writing can benefit you in the future.

“The most revolutionary thing you can be is articulate,” Quiñonez said. “They will fear you if you have language.  That is why we need to read and write.”

He also discussed the positive effects of persevering through personal hardship and what happens when you finally succeed.