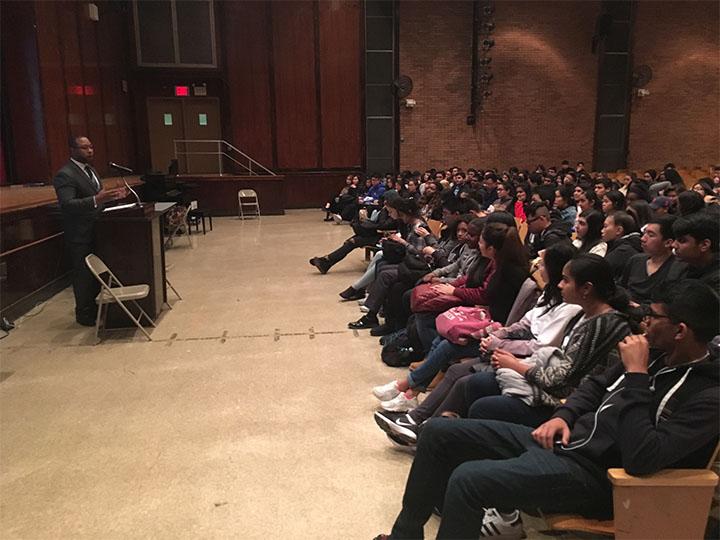 “You can do anything” – Jarrett Adams

When Innocence Project attorney Jarrett Adams made his way into Francis Lewis High School, awe and silence erupted throughout the auditorium. What students did not expect from Adams was a mugshot projected on the screen next to him.

Jarrett Adams was 17 years old when he was wrongfully convicted of sexual assault. He was sentenced to 28 years in prison until his discovery of The Innocence Project. With the help of DNA exonerations, Adams was freed after 9 years in prison and his life had transformed before his eyes.

The Innocence Project is an organization solely committed to identifying the truth behind those falsely accused. With the use of advanced technology, DNA testing provides answers to closed doors and the innocent are able to gain back the freedom they once had.

“Your life can turn in a blink of an eye,” Adams stated while eyeing his past self on the computer screen.

Though a difficult journey, Adams worked his way back up and defied all odds by attending Loyola Law School in Chicago. He endured long commutes and long nights, burying his head in textbooks that would soon make him the definition of not allowing the past to define you.

“What I’m saying is beneficial for you all,” Adams said. “You can’t get better if you don’t put the time in.”

His message was heard amongst students whom found sound in his story.

“To have hope in a place he called hopeless must have required enormous strength, junior Nasita Maywalall said. “I finally realized the weight that choices have.”

His sole belief in the power of education and role in the criminal justice system inspired thought to teachers as well.

Constitutional Law teacher Ms. Linge believed that Adams’ speech would provide a sense of knowledge and future opportunity for students.

“Given that I see my students as future attorneys, I know these are problems and issues many of them will face should they choose to enter the legal profession,” Linge stated. “I hope to expose them to all sides of the criminal justice system. I wish for them to question and to begin to figure out ways that we can improve the system so that it is reliable and fair for all.”

The message from Adams certainly inspired others to bring his story home.

“There was certainly an intensity that proceeded Mr. Adams visit,” said Social Studies AP Patrick Dunphy. “I spoke to my parents and family that weekend.”

Jarrett Adams reminds the world that there is a second chance for everyone.