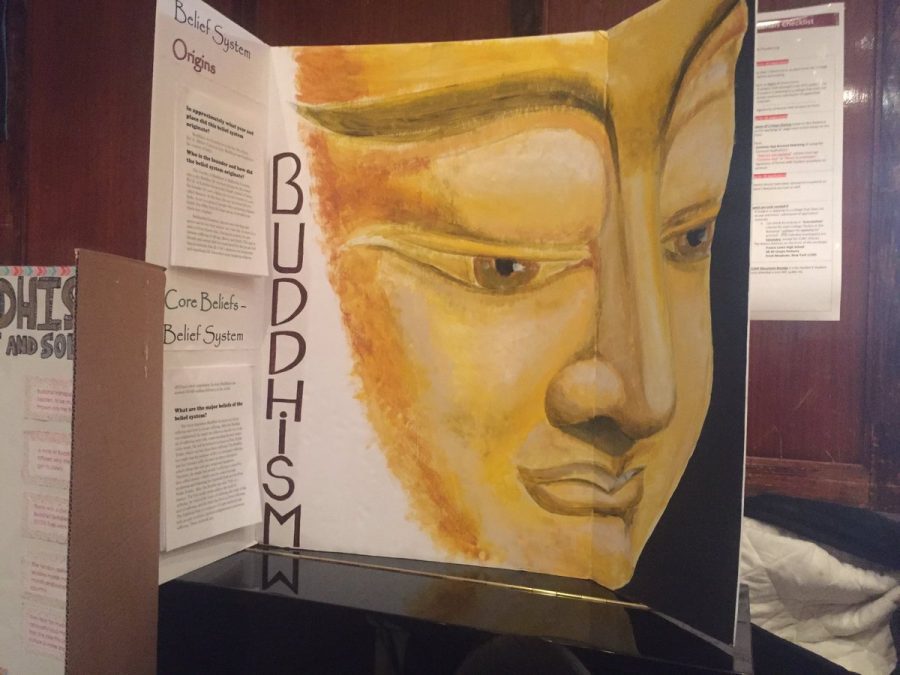 FRESH MEADOWS, NY – The FLHS Social Studies Department held their annual World Peace Conference in the school auditorium on December 20 & 21 to promote religious tolerance and raise awareness on the worldwide impact of religion.

For students to better understand different world faiths and promote peace, social studies classes created a variety of creative and informative presentations to display, and a panel of world religious leaders representing their own faiths answered student questions of what their religion means to them as individuals, to society, and how they can coexist.

“The WPC was created so that people can understand what guides people in their lives, what’s important to people,” social studies teacher Mr. Blumberg said. “We try to teach our children to live upright lives, and it’s a way to solve problems peacefully rather than through conflict.”

The World Peace Conference is an annual two-day collaborative event amongst all 9th grade global classes, the only one on such a scale in the district. This is only the second time it’s been held, and is still relatively a new concept, but it has already seen visible results. This year featured presentations on Judaism, Christianity, Buddhism, Daoism, Animism, Shintoism, Hinduism, Islam, Confucianism, and various large historical religious conflicts.

“I’ve learned a lot, especially about Daoism,” student Michael Bowen said. “I didn’t even know Daoism was a religion in the first place. I’ve heard of it before. I didn’t know it was a religion, but I learned it was polytheistic… It’s not like an Abrahamic religion where they have one supreme god.”

On the first day of the conference, students presented their projects on various religions while leaders from five different religions were invited as guest speakers on the second day.
Dr. Kurshid Khan, former Islamic Circle of North America president, Greg McCue, founder of Rising Tide Acupuncture and Daoist scholar, and Reverend Lindsay Lunnum of an Episcopalian Christian Church were able to come together and share their unique opinions and stories.

“Islam means peace,” Dr. Khan said. “You find that every basic person is good. Don’t hate anyone no matter who the person is.”

They discussed not only peace in society, but also within themselves.

“Daoism has taught me to accept others for their lives and beliefs; to be genuine in my actions,” McCue said. “Non-action… non-competition… non-aggression.”

“As an adult… you start to realize parts of your identity…” Lunnum says. “Who am I actually? I’m a woman, and I can’t change that… I can’t stop being an outspoken person… What religion gives me is a sense of hope, love, and joy.”

The World Peace Conference has opened a gateway for the FLHS community to exchange with one another, their cultures and personal beliefs. Students and teachers alike, were able to learn more about the world around them from this awakening event.

“If you live in a world that is beautiful… even if it’s broken… things can be made better,” Lunnum said.