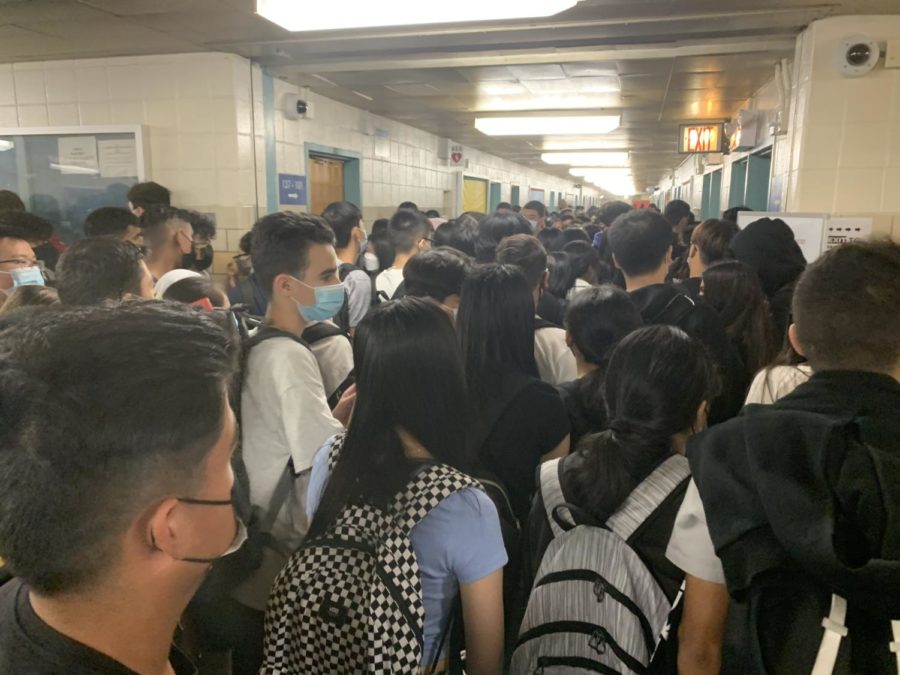 Maskless students. Overcrowded hallways running at 130%, and students holding their backpacks in tight corners constantly bumping into each other. Teachers work extra hours to accustom a longer schedule. Low amounts of testing and samples. Social distancing is non-existent, and enforcement of CDC guidance is minimal. That’s the COVID-19 situation that schools such as Francis Lewis and the broader DOE face in general.

Since the beginning of the 2021-2022 school year, and despite being at 130% capacity, Francis Lewis has maintained a 100% in-person schedule, although activities such as clubs and tutoring have been modified with hybrid schedules. While COVID-19 transmission continues to skyrocket in school communities, schools such as Francis Lewis have yet to update their remote learning or testing protocols to accommodate a rise in COVID cases.

“The schools are failing us, this is completely unsafe,” said Jeffrey Lin, a senior at Francis Lewis. “I think it’s time for schools to consider what they’re doing to actually keep us (students) safe.”

Francis Lewis News conducted an investigation to report on the school’s COVID safety protocols, including the testing policy, ventilation measures, enforcement of masking, and social distancing.

One hundred individuals out of 5000+ students and faculty at Francis Lewis are being randomly tested for COVID-19 per week back in October 2021. This was confirmed in an email by Dr. Marmor, the principal, to FLHS News. Additionally, Dr. Marmor also stated that the school does not differentiate between the number of students and teachers tested. That equates to less than 2% of students being tested.

However, Dr. Marmor stressed that despite the low testing numbers, there was no transmission in the school.

“At this time no case has ever been tracked to being transmitted inside the school, since the beginning of the pandemic,” Dr. Marmor said in an email. “The safety measures are working.”

When asked about Dr. Marmor’s statement on the possibility of having no confirmed cases being traced back to the school, professor Jen Jennings, a sociology professor at Princeton University and renowned statistics professional, believed that the chances were close to none.

“I don’t believe that that’s knowable with the existing data,” said Jennings. “It may be the case in any given building that there’s really solid and clear proof about the source of cases.”

Although the school administration claims that no spread has been traced back to the school, there is still a spread regardless of origin. At Francis Lewis alone, there are active confirmed cases. In the past couple of weeks, the DOE’s situation room responsible for COVID contact tracing and reporting new cases has been overwhelmed. For this reason, actual numbers provided may be an undercount.

“One of the most difficult things about establishing the source of COVID is that it’s asymptomatic,” said Jennings. “And so we don’t always know what the source (of COVID-19) is. To really nail that down, you need to be asymptomatically testing everyone in the community.”

Similarly, students alike have shared their discontent with the way the school administration is handling testing in schools.

“The school is literally testing the same people over and over again, what’s the point?” said Jennifer Park, a sophomore at Francis Lewis. “If they (students) don’t want to get tested, then they won’t because it’s optional.”

In addition to testing the same people over and over again, other students also bring up the point of inadequate health screenings that could easily be inputted with false info.

“It’s always the same students getting COVID tested, while other students have never been tested,” said Matthew Afzali, a junior at Francis Lewis. “Also, students can lie on the health screenings or just take a screenshot and not do it anymore. They just check for a green checkmark.”

Across over a possible 550,000 students that could be tested, only 190,000 students have consented to test. To date, the DOE has only conducted 530,000 student tests since September 13th, a number that is likely skewed due to the city’s testing policy, which only requires schools to test 10% of their populations weekly. The issue? The policy only tests 10% of students that actually consented. At schools such as Francis Lewis with a low consent rate, there is relatively little to no correlation between the actual “positive” rates when compared with the total school population.

In addition to inadequate testing for students and staff, an independent investigation conducted by FLHSNEWS also found that highly populated areas of schools such as the cafeteria in Francis Lewis had failed to uphold safe and healthy CO2 levels, even reaching 2000ppm at certain points.

Schools such as Francis Lewis also have some of the highest overcrowding rates in the entire city. Currently, FLHS runs at 130% capacity, compared to the 200% capacity pre-COVID. The CDC recommends that “When it is not possible to maintain a physical distance of at least 3 feet, it is especially important to layer multiple other prevention strategies, such as screening testing, cohorting, improved ventilation, handwashing and covering coughs and sneezes, staying home when sick with symptoms of infectious illness including COVID-19, and regular cleaning to help reduce transmission risk”

“Staff don’t really separate kids in groups from one another but rather are too focused on getting kids to move,” said Richard Diaz, a junior at Francis Lewis. “For example, you can walk with a big group of friends and close to each other but if you’re standing still in one place you would get in more trouble.”

When asked about the way Francis Lewis handles COVID-19 protocol, many students offered a similar perspective as Diaz.

“There are too many students and even faculty members who walk around with their masks worn improperly,” said Amy Liu, a student at Francis Lewis. “They do this in the crowded hallways, in classrooms, out in the gym field, outside of school grounds, and at the bus stops where numerous people are without any regard for their safety. People clearly aren’t concerned enough about avoiding another lockdown.”

However, certain members of the community have also been supportive of the way that schools such as Francis Lewis have been handling in-person instruction to date.

“Personally I feel very safe,” said Ms. Antolos, a dean at Francis Lewis. “I am fully boosted and I am perfectly fine. If the mandate were taken away tomorrow I’d be the first person to walk into the building with no mask on.”

With a testing protocol that tests less than 0.2% of the school community and a change in policy that no longer requires vaccinated “close contact” members to quarantine, mixed in with other failures in COVID-19 regulation, is the possibility of transmission really as low as schools claim?

“Many of our members have informed us that their schools begin measuring the 3 feet from the middle of a student’s desk, rather than the edge,” UFT President Michael Mulgrew said in a 10/6 Testimony to the City Council. “This may sound like a minor change, but it is not. This can be the difference between 16 square feet per student with barely any aisle space between desks and 35 square feet per student, which provides for 3 feet of space from the edge of every desk.

Typically following the CDC’s guidance, a counter-solution to overcrowding at Francis Lewis and other NYC schools is the implementation of proper and effective ventilation. But with windows that remain stuck in rooms and unplugged filters, many have pointed to the fact that the schools have also failed in this aspect as well.

“I think it’s impossible to really do that (proper ventilation),” said Senior Joshua Matthew when asked about proper ventilation at Francis Lewis. “Some classrooms barely have proper windows that allow air to move effectively. Sometimes those windows are just simply blocked by books and other things too.”

Back in August 2021, The Townsend Classic revealed that the DOE’s self-reported “HEPA” air ventilation purifiers were not indeed HEPA-certified. Upon discovering this, the integrity and honesty of the DOE have also been called into question. On November 29, an eagle-eyed teacher also noticed that the DOE had secretly changed language regarding the ventilators at schools.

As the COVID-19 pandemic and new variants such as Omicron continue to spread rapidly in schools, the larger debate of keeping schools open for over 1.1 million NYC students comes into question. Should students, staff, and families continue to rely on an Education Department with failing COVID-19 policy, and risk the safety of the school communities? Or is it finally time for NYC schools to step-up and finally take action that will ensure the safety of everyone?

“Our school is large and there is nothing we can do about the number of kids in the hallways, even with the changed schedules,” said Richard Diaz, a student at Francis Lewis. “However, sometimes staff members of the school focus on the wrong protocol, like getting people to move from an empty space rather than telling them to spread apart. When you combine these elements, it’s a recipe for disaster.”