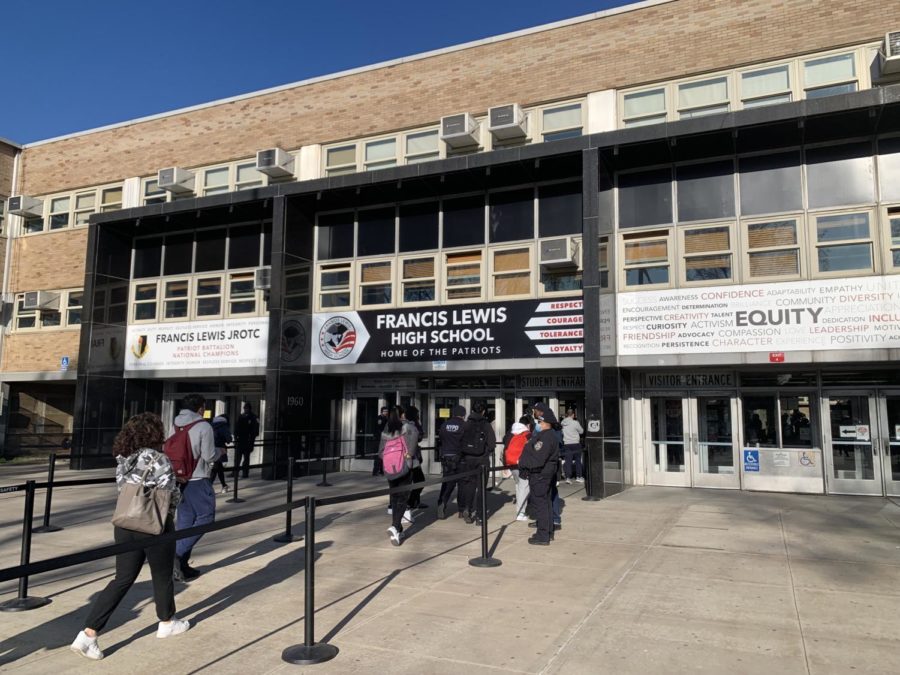 Students at Francis Lewis line up for the NYPD metal detectors on Thursday, April 28th.

“Ultimately, we know that there was a shooting about a half mile away,” Principal Dr. Marmor said.  “That shooting occured south of the highway, almost a 12 to 15 minute walk away from here. We have no indication at all that it’s related to anything in this school. The person of interest that they’re looking for, which is publicly known, is a 22 year old who has never been affiliated with our school.”

Some Francis Lewis students were surprised that this occurrence transpired in the Fresh Meadows area.

“This is horrifying, never would I have ever believed that a shooting would happen near Francis Lewis,” said Elicia Tran, a junior at Francis Lewis. “I hope whoever did this is caught and brought to justice.”

The NYPD School Safety Division implemented an increased security presence at Francis Lewis High School along with metal detectors on April 28-29, something usually only seen twice or three times a year. Students first reported long lines waiting for the screening, with additional levels of patting down and bag searching also implemented at the school entrance.

“NYPD School Safety Division had unannounced random scanning at our school today as part of the NYCDOE mobile unannounced scanning program,” Dr. Marmor said. “Is it a coincidence that they happened to pick that day to do it, probably not, but it isn’t because anybody feared that there was something wrong here. We are committed to providing our students with a safe and nurturing learning environment and will remain vigilant regarding this incident.”

Items such as pepper spray, scissors and culinary knives were confiscated by the NYPD School Safety Division during the two days metal detectors were used at Francis Lewis.

“The vast majority, large majority of the things confiscated were pepper spray, and the pepper spray in almost all cases were given to the kids by their parents,” Dr. Marmor said.  “Unfortunately, whether they like it or not you’re not allowed to bring it into school.”

This event doesn’t change anything about the thoughts and feelings administration has about the safety of our building, according to Dr. Marmor.

“This was an unrelated event to our school,” Dr. Marmor added.  “We always, in the building, focused on our safety and security. Safety and security has been my goal for the past ten years, probably a bit longer than that. I still believe that, and statistics point out, that we are one of the, if not the safest school in the city.”