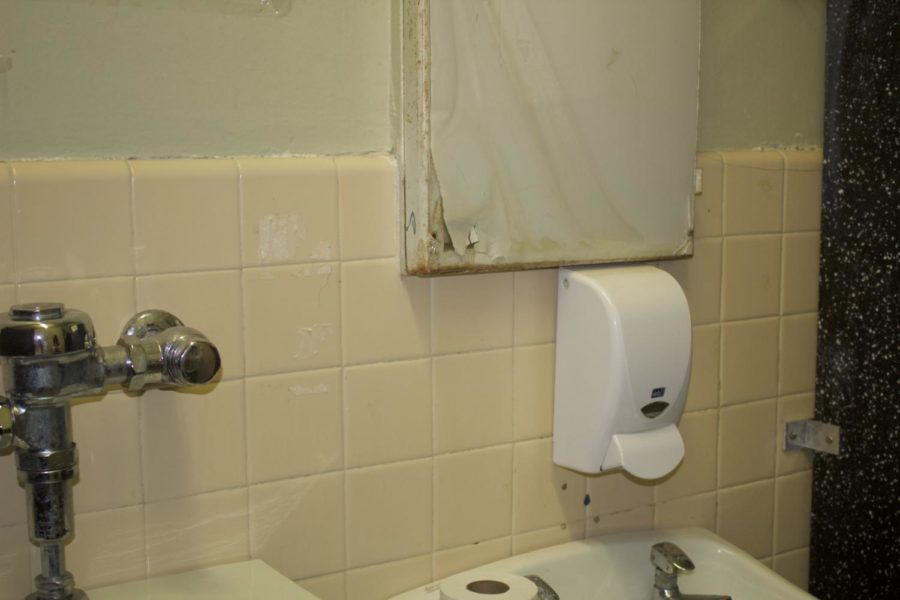 As you push open the door to the girl’s student bathroom and walk in, the first thing you notice is the bold writing in red above the sink, ripped and destructed posters, and scratched up mirrors with accents of black sharpie. You look up and see the eerie broken tube light. You open up one of the stalls but the lock appears to be broken, so you peek into another to make sure it’s working and clean. It’s small and barely lit, but better than nothing.

The floor is wet with scraps of toilet paper scattered, and gum sticks to the walls. You head out to the rusty sink and an empty soap dispenser is waiting for you. You say to yourself, there’s no way I’m going back here again.

“I’d say that the bathrooms are very messy, and unsanitary, and whenever I walk in there I just feel as if the entire space is unclean,” freshman Daniel Xu said.  “I don’t feel comfortable using it most of the time.”

The custodians actively make sure the bathrooms are clean, according to Francis Lewis custodian Jack, who did not want to give his last name.

“We have a cleaner from 7 am to 3:30 pm that goes around to every bathroom in the building and cleans them, stocks them, and mops them all day long,” Jack said. “Then we have a female that comes in at 4 o’clock. She works 4 to 8 and she cleans them at night.”

“We do our part and we go to the bathrooms all day long, but I have noticed when they have a school aid watching the bathroom it’s a lot better, the kids don’t wreck it as quickly,” Jack added.

However, some students feel that there is not enough being done to maintain the cleanliness of the student bathrooms.

“I’d say that the school should clean the bathrooms out more often, or maybe more thoroughly because there are some spots of the bathroom that are seemingly always dirty,” sophomore Stephanie Zou said.  “We always notice the floor having dirty water and it makes us feel grossed out.”

Although custodians acknowledge that bathrooms can be messy, some of the responsibility should also fall on the students.

“It is very difficult for the custodians to keep the bathroom clean when regularly people are ripping the soap off the walls, and they’re emptying all the paper towels and shoving them into the sinks and shoving them in the toilet,” Dr. Marmor said. “It is very difficult for me to ask the custodians to keep replenishing the sanitary materials, meaning soap and paper towels, while the kids are destroying them.”

In addition to poor hygiene, the bathrooms have several inconveniences such as broken and missing parts, only a few of which are reported to the school. For example, the broken light in the girls bathroom on the strip.

“We are looking into the issues,” Jack said. “We actually lost the feed to the light so we have to re-run a whole feed to that light for it to work.”

“If you know that a lock is broken, somebody should report it to us because when we go in and clean the bathroom we don’t lock the door to check that,” continued Jack. “Somebody needs to inform us that the latch is broken.”

Students can also report issues in a student bathroom to a dean and he/she will inform the custodial staff so they can take care of it.

“Students tend to make complaints about the conditions of the restrooms to their teachers or other staff members,” Dean Ms. Berg said. “If a dean is told about an unhygienic stall, we inform the custodial staff over the radio, and they take care of the concern. This happens occasionally.”

“I always see vandalism and on the walls, there’s always writing,” Zou said. “It makes me annoyed because the writings are sometimes inappropriate.”

According to Jack, faculty is in place to help deter vandalism in bathrooms, although it doesn’t necessarily stop students from vandalizing the space.

“Right now the administration has school aids that are sitting outside the bathroom, if you notice, in some locations and that does help the vandalism,” Jack said. “But you do get it here and there that you’ll get graffiti or somebody will take the paper towels and put it in the toilet bowl, flush it and then it backs up. Then we have to go in with a machine and clean everything up and fix it. It does happen every once in a while.”

If a student is caught vandalizing on school property they are reported to administration and there are consequences.

“I have never personally witnessed a student vandalizing the school bathrooms, but if one is found to have done so, there are consequences,” Ms. Berg said. “The student will be brought to the dean’s office where Mr. McCarthy deals with the issue.”

Another issue that students are experiencing when using student bathrooms at Francis Lewis is student vaping. Studies show that approximately 4.7 million middle and high school students use at least one tobacco product, including e-cigarettes. It is not uncommon to see students hanging in the bathroom and sneaking a vape when the deans aren’t looking.

“I think it does make the condition worse because the bathroom is already so small and crowded and there’s so much smoke in the air, which makes it really tight and hard to breathe,” Zou said.  “I always see so many girls crowding the door and hanging out in the bathroom, not using the stalls, just talking.”

Although some students have witnessed vaping in student bathrooms, these instances are almost never reported to administration, according to Dr. Marmor.

“It’s very rare that it is reported,” Dr. Marmor said, “I mean almost zero reports. So if we want to do something about it, then the kids who are in the bathrooms when its happening have to come and tell us, because if we can’t go and catch it while it’s happening, there’s nothing I can do about it.”

“My guess is that the places where this is happening – meaning the vaping and the vandalism – are happening in bathrooms that are not monitored by an adult at the door,” Dr. Marmor said.  “Next year we are going back to a regular schedule and we will have adults at every door.”